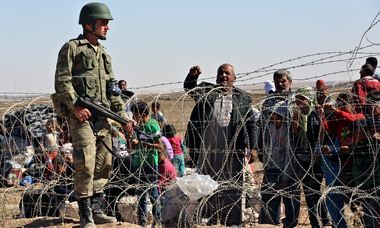 Turkish border guards in March and April used excessive force against Syrians and a smuggler trying to reach Turkey, killing five people, including a child, and injuring 14 others, the group said on Tuesday.

The rights group also urged Ankara to abide by international laws and stop attacking refugees or banning them from crossing the borders.

The New-York based watchdog also called on Turkish authorities to investigate the excessive use of force by the Turkish border guards.

Turkey has banned Syrians from crossing into the country since at least mid-August 2015.

The report said the Turkish border guards even fired at Syrians living near Turkey’s borders as they approached to recover victims at the border wall after the shootings and assaults.

Turkey and the European Union sealed a controversial deal intended to stem the flow of refugees from Syria and other troubled countries to Europe via Turkey in return for financial and political rewards for Ankara.

“The EU shouldn’t just stand by and watch as Turkey uses live ammunition and rifle butts to stem the refugee flow,” said Simpson.

“EU officials should recognize that their red light for refugees to enter the EU gives Turkey a green light to close its border, exacting a heavy price on war-ravaged asylum seekers with nowhere else to go,” he said.