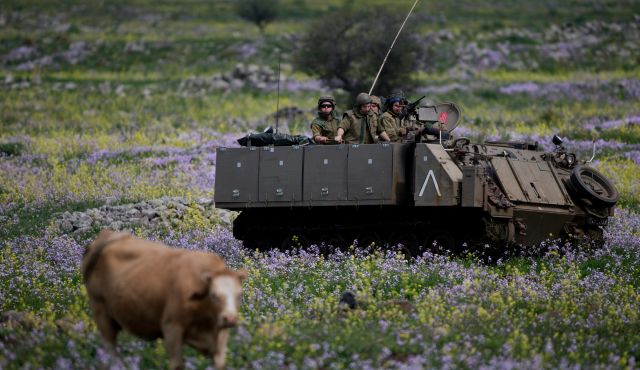 Alwaght- Syria’s Golan Heights either the part inside the Syrian territory or that under the Israeli occupation are seen as Tel Aviv’s weak spots, or its Achilles heel. Therefore, the Resistance Axis, represented by Lebanon’s Hezbollah and its allies could use the capacity of the region and deploy forces there in a bid to prepare the ground for more vulnerability of the Israeli regime and at the same time considerably influence the Syrian security crisis.

The Golan Heights are located as a plateau between Lebanon, the Israeli regime, Jordan and Syria. The strategic heights of Golan present a supremacy for their holders, as with a reliance on their strategic location they could allow gaining control of the surrounding areas.

The central Golan’s position is of geographic significance as it overlooks the other areas around.

In addition to their economic importance, natural resources, links with other Syrian regions as well as their special agricultural conditions, Golan Heights are militarily and strategically significant.

The Golan region which accounts for only one percent of Syria’s territory is special for Damascus from a couple of dimensions and carries further sensitivity for the Syrians.

The Syrian government, led by President Bashar al-Assad, gains a large part of its legitimacy from its standing firm in the face of the Israeli regime. Meanwhile, the Syrian efforts to liberate Golan Heights from the grasp of Tel Aviv have provided the Syrian resistance with persistent drives.

The Syrian government’s rejection to step back from the Israeli regime is one of the reasons behind Syrian government’s credibility among the Arab world’s public opinion. Those Arab countries which work with Tel Aviv always found Damascus a hurdle in front of them. They admit that Syria is a key to peace in the region, however.

Militarily, the Golan Heights are important for Syria because they overlook the Syrian capital Damascus. Tel Aviv’s occupation of parts of Golan region has withheld from Syria any possibility of military operations against the Israeli regime, making it difficult for Damascus to even defend itself. Retake of full control over Golan provides Syria with a larger potential to respond should the Israeli regime launches attacks against Damascus.

On the other hand, the geopolitical position and geostrategic significance of the Golan Heights stand as the major strategic factors for Tel Aviv. Due to appropriate geographic position it is possible to establish reinforcements there. Such a characteristic could bring under fire of artillery forces positioned in the Golan Heights many of the Israeli towns, especially those located in northern Jordan Valley.