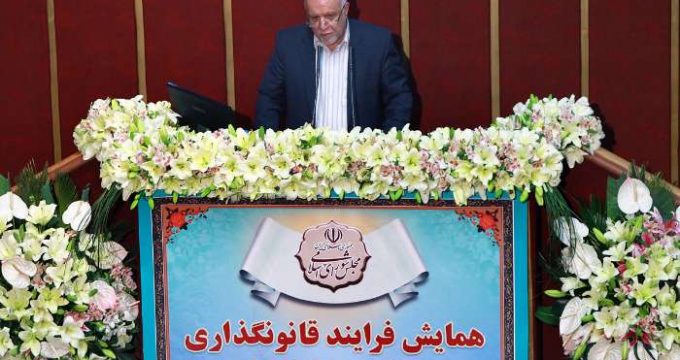 “Saudi Arabia is plotting against us in the marketing field,” Zanganeh said at a meeting with members of the incoming parliament in Tehran on Sunday.

Describing such ploys as “unusual in the marketing arena”, the minister said Riyadh offers lower prices to the customers looking for Iran’s oil.

Despite the fact, Iran has succeeded to double its oil exports, he stressed.

Reiterating Iran’s determination to regain its share of the oil market after coming into force of a lasting nuclear deal with world powers, Zanganeh said the country aims to “produce 4 million barrels per day of crude oil” without any consideration for any side.

He once again rejected a proposed oil freeze plan by the OPEC members, noting that Saudi Arabia’s “obstinacy” led to the failure of a recent meeting of oil-producers in Qatar’s Doha.

Iran is striving to maximize its oil output after the termination of the sanction under the Joint Comprehensive Plan of Action (JCPOA), a lasting nuclear deal between Tehran and the Group 5+1 (Russia, China, the US, Britain, France and Germany) that took effect in January.

Last week, President Hassan Rouhani said the country’s exports of oil and gas condensates have reached 2.3 million barrels per day (bpd), almost twice as much as before the JCPOA.