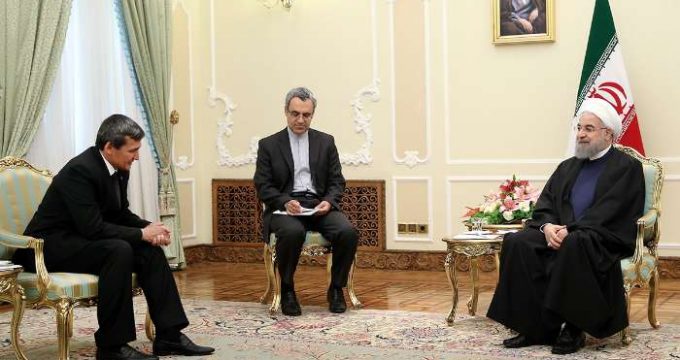 According to the report of the Presidential Office on Saturday, President Rouhani made the remarks in a meeting with visiting Turkmen Foreign Minister Rashid Meredov.

Rouhani said that the two countries have had joint successful cooperation with each other and this should be expanded in line with interests of the two nations.

Iran, as a gate to connect Central Asian countries to the Persian Gulf and southern waters and Turkmenistan as an access gate to the Central Asian states and even east of Asia, should try to develop and strengthen all-out ties with each other, the president said.

President Rouhani said that the two countries may develop cooperation in Caspian Sea, protection of environment in the region, assisting to compile and accelerate legal regime of the Caspian Sea.

Fight against drug trafficking, establishment of security and stability in the region, confrontation with the terrorist and extremist groups are among other fields of cooperation, Rouhani added.

Meredov conveyed greetings of Turkmenistan president to his Iranian counterpart and by referring to cultural and historical commonalties between the two nations, called for all-out development of ties between Tehran and Ashgabat.

He appreciated Iran’s supports for Turkmenistan in regional and international circles and organizations and underlined the necessity to use all capacities and opportunities for cooperation in direction of all-out ties upon good neighborliness, equality and common interests.

Meredov said that fight against terrorism, extremism and drug trafficking has always been emphasized by senior officials of Iran and Turkmenistan.