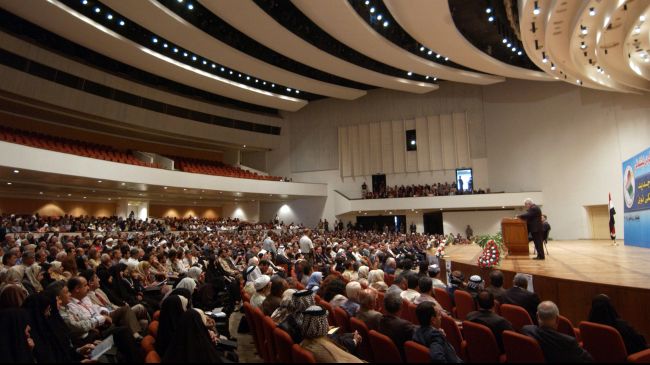 Supporting Iraqi government only way out of problems

TEHRAN (Basirat)- The Iraqi government is no less involved in corruption compared to the corrupt and inefficient governments of some Arab states. But today these are the problems of the government which have highlighted issues like corruption and inefficiency of the administration in the eyes of people.

The Iraqi government is no less involved in corruption compared to the corrupt and inefficient governments of some Arab states. But today these are the problems of the government which have highlighted issues like corruption and inefficiency of the administration in the eyes of people.

There is a famous Italian saying which states ‘If it does not rain, a corrupt government is to blame for it’. This alludes to the current situation in Iraq.

The Iraqi government is no less involved in corruption compared to the corrupt and inefficient governments of some Arab states. But today these are the problems of the government which have highlighted issues like corruption and inefficiency of the administration in the eyes of people.

The major problem which has exacerbated the disputes in Iraq is the government’s inability and inefficiency to establish security across the country, an issue which has direct connection with Daesh terrorist group’s presence inside Iraqi borders. Therefore, making reforms and forming a technocrat government do not seem to be starting points for tackling the Arab country’s woes. Basically, efforts aimed at implementing reform plans in Iraq are not accurate and rational, taking into account the country’s landscape of political realism as well as the law structure, political  customs after 2003, and ethnic-religious considerations with respect to power. If this comes true, it will fail to solve any problems of the Iraqis as expected.

Choosing a replacement (Haider al-Abadi) for former Iraqi prime minister Nouri al-Maliki failed to pave the way for a national political consensus in Iraq, and it also worsened the situation unlike rather simplistic predictions. From a politician’s perspective, this is convincing to say that a reshuffle of Prime Minister Haider al-Abadi’s cabinet will not only improve the situation in the country but also will make its domestic problems more complicated and exacerbated. Making reforms mindless of political realities will not make its way through a better situation. A share of political power should be given to every political trend and party based on the scale of their power. Also, mounting pressure on Iraq’s parliament and political parties by any trend and trying to make them back down on their share of power is not an appropriate approach at all. This is the simplest and most basic way for sharing power in a government.

The prime minister’s overemphasis on convincing all political parties and also some extremist efforts by certain political parties aimed at implementing reform plans have placed the government in a political deadlock. The government from one side cannot meet all the demand of parties and rival groups, and from the other it is expected to move toward a complete collapse if sweeping reforms aimed at satisfying all political groups are finally made. The reason is that every change will be a cause for more coming changes and, therefore, the government will not be able to contain them.

But what the Iraqi people are demanding for is something else. For instance, Iraqi Sunnis and Kurds give priority to the issue of security more than the reform plans because they and their homeland are more exposed to the threat of Daesh Takfiris. This can be easily seen in some recent stances by Sunni and Kurdish representatives in Iraq’s parliament seeking to support the government and reinstate the country’s ministers of defense and interior. Thus, encouraging as well as expanding reform plans is an issue which foreign states and their media outlet can use in their own interest. Iraq’s political leaders should remain vigilant not to let the foreigners play in their court.

Undergoing a transition from such a natural situation and insecurity in Iraq, more than any reforms, needs Haider al-Abadi to be placed in the center of the political developments in order to be able to contain the instabilities in the country. Then from one side he can garner people’s support and from the other will be able to marginalize political parties and prepare the ground for political haggling with these trends from the position of strength.

Although the caring attitude and good intention of prominent Iraqi cleric, Muqtada al-Sadr, is apparent to everyone but it should be noted that, despite the government’s inability to address the problems of the society, no trend can address the Iraqi people’s issues and meet their demand singlehandedly and without the help of the government.

This is a bitter reality that a strong government has priority over a fragile and weak technocrat one in Iraq given the current situation in the country and considerable financial charges. Such a powerful administration can further help stop Iraq from getting bogged down in the mire. Therefore, at present, giving support to the government and the prime minister is the only through which Iraq can reach the beach of tranquility.

This article was written by Hassan Molaei for Basirat.ir on May 5, 2016. Hassan Molaei is a senior expert and researcher in Arms Control and Disarmament Diplomacy. His major field of expertise is global Non-proliferation regimes. He has published abundant articles in Persian and English in various journals and publications.