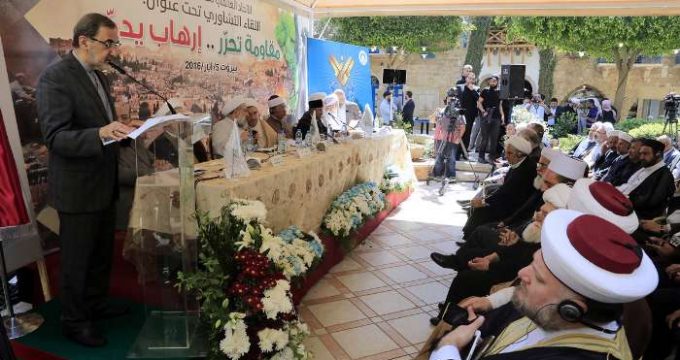 TEHRAN (Tasnim) – Ali Akbar Velayati, an international adviser to Leader of the Islamic Revolution Ayatollah Seyed Ali Khamenei, said on Thursday that certain countries are making every attempt to fan the flames of sedition in the region.

Addressing the International Union of Resistance Scholars conference underway in Beirut, Lebanon, Velayati stressed that instead of fighting the common enemies like Takfiri groups, some regional states are trying to wage proxy wars which will only undermine the Islamic Ummah (community).

He added that Takfiri groups are distorting the image of Islam and also preparing the ground to ignite the flame of sedition in the region.

Velayati, who is also the president of the Center for Strategic Research of Iran’s Expediency Council, further slammed the international community for not only remaining silent on terrorists’ crimes, but throwing support behind such groups.

Terrorism, which has posed a great threat to the global peace, will backfire and haunt those countries that are supporting it, he stressed.

Elsewhere in his remarks, Velayati described a recent move by some Arab countries to blacklist Lebanon’s Hezbollah Resistance Movement as a “sinister phenomenon” in favor of the Zionist regime of Israel and one that seeks to undermine resistance movements.

Reacting to the decision, Hezbollah described the PGCC member states as “reckless and hostile”, blaming Saudi Arabia for the decision.

The move by the six-nation Arab bloc followed Riyadh’s decision to halt its USD 4 billion in aid to Lebanese security forces in the wake of recent victories by the Syrian army, backed by Hezbollah fighters, against the Takfiri militants fighting to topple the Damascus government.

Later, Secretary General of the Lebanese Hezbollah Resistance Movement Seyed Hassan Nasrallah said the Saudi regime seeks to instigate “strife” between Shiites and Sunnis in the region, urging the Lebanese not to be intimidated by threats posed by Riyadh and Tel Aviv.

Islamic Resistance Ulema Union, Velayati visit to Lebanon May 6, 2016
Supporting Iraqi government only way out of problems
US vows to continue operations in Hormuz Straight despite Iran’s threat