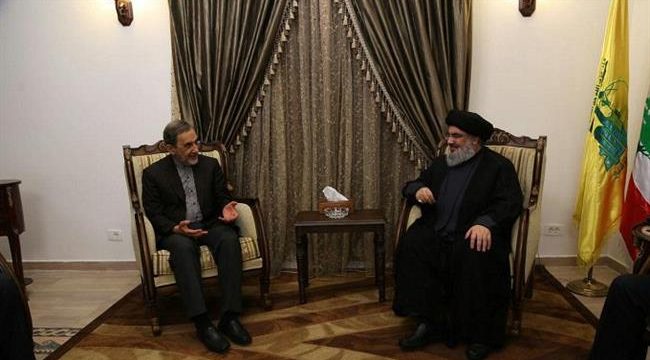 The Lebanese resistance movement Hezbollah is a source of pride in the Muslim world, says a senior adviser to Leader of the Islamic Revolution Ayatollah Seyyed Ali Khamenei.

“We regret that instead of condemning the Zionist regime [of Israel], terrorists and extremist and Takfiri moves, certain regional countries issue statements against the [anti-Israel] resistance front and Hezbollah,” said Ali Akbar Velayati in a meeting with Hezbollah Secretary General Seyyed Hassan Nasrallah in Beirut on Thursday.

“Hezbollah is a source of pride for the Muslim and Arab world and it will triumph over all these threats and animosities,” he added.

Velayati was referring to a recent move by some Arab countries to blacklist Hezbollah as a terrorist organization.

Velayati, who is also president of Center for Strategic Research of Iran’s Expediency Council, reiterated the Islamic Republic’s unwavering support for the oppressed nations in the region.

Nasrallah, for his part, briefed the Iranian official on the latest regional developments.

Reacting to the decision, Hezbollah described the [P]GCC member states as “reckless and hostile”, blaming Saudi Arabia for the move.

The decision followed recent victories by the Syrian army, which is backed by Hezbollah in its battle against Takfiri militants fighting to topple the Syrian government.