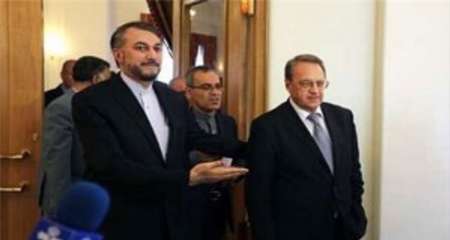 TEHRAN (FNA)- Iranian Deputy Foreign Minister Hossein Amir Abdollahian in a meeting with his Russian counterpart Mikhael Bogdanov in Moscow on Wednesday underlined that the Takfiri extremist groups should be designated as terrorist organizations.

“Ahrar al-Sham and Jeish al-Islam should be included in the list of the terrorist groups,” Amir Abdollahian said.

Meantime, Amir Abdollahian and Bogdanov discussed the latest developments in Syria and Yemen.

In a relevant development in January, Iranian Ambassador to Damascus Mohammad Reza Rao’uf Sheibani underlined that the Syrian government is ready to settle the country’s problems through political means, but meantime, said the terrorists should be kept away from talks on Syria.

“The Syrian government is ready for any political solution to decrease the country’s problems and Damascus will cooperate with all those who want a political solution,” Rao’uf Sheibani said in an interview with the Syria-based Damascus Time news website.

Stressing that terrorists don’t have any place in the negotiations, he said, “There is no difference between the Syrian and non-Syrian terrorists since a terrorist wants chaos, destruction and killing and therefore, he/she wants continued chaos and his/her life will end by the termination of chaos.”

Rao’uf Sheibani underscored that disarmament of militants in Syria is a prerequisite for the start of a political solution to the crisis.

In relevant remarks in mid-December, Iranian Deputy Foreign Minister for Europe and America Majid Takht Ravanchi underlined that participation of terrorist leaders in talks on Syria would lead the negotiations to failure.

“The talks which are participated by the terrorists would never end up in results,” Takht Ravanchi said in a meeting with his Czech counterpart Ivo Šrámek in Prague.

Also in a meeting with another Czech Deputy Foreign Minister Martin Tlapa, he warned of the spread of terrorism and its global threat, and said, “The crisis in Syria cannot be settled without collective campaign of all countries against terrorism.”

Tlapa, for his part, underlined that the problems in Syria don’t have any military solution, adding that the political solution should be based on the Syrian people’s will.

Takht Ravanchi’s remarks came after Saudi Arabia hosted a three-day meeting of terrorist groups in Riyadh on December 8-10. The Syrian Kurds, who control large parts of Northern Syria, had not been invited, but Al-Qaeda’s official branch in Syria, the al-Nusra Front and Ahrar al-Sham terrorist groups were there. The convention was meant to discuss ways to integrate militant groups in Syria.