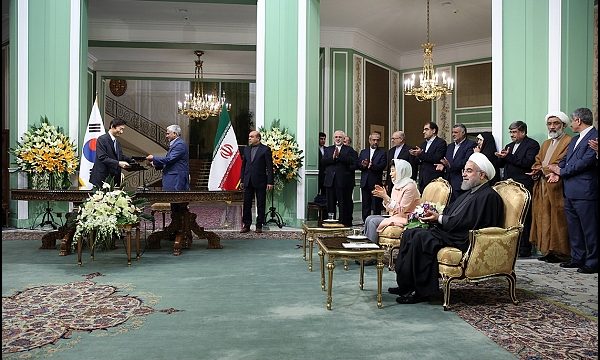 Addressing a trade meeting between Iran and South Korean businessmen here on Tuesday, she said she was happy the meeting was held in the historical city of Tehran which is located on the Silk Road and hoped the talks would have positive outcomes.

Referring to the old-standing cultural relations between Korea and Iran, she said the sport of Chogan (Polo) found its way to old Korea about 1,200 years ago with both countries continuing their friendly relations on mutual trust.

She said her country also built a refinery in Isfahan in the 70s and then started cooperation with Iran in building ports.

The President further stressed that over 230 Korean businessmen were accompanying her in the visit to explore common grounds of cooperation with Iran.

According to the President, the volume of trade between Iran and South Korea stood at over dlrs 17.4 billion in 2011 but dropped to dlrs 6.1 in 2015 because of sanctions.

She further hoped agreements on mutual cooperation in such areas as customs, exports and imports could lead to expansion of relations between the two countries.

Park said Korea is to open an Iran desk with Iran having agreed to do the same thing about South Korea which would facilitate trade exchanges between the two nations.