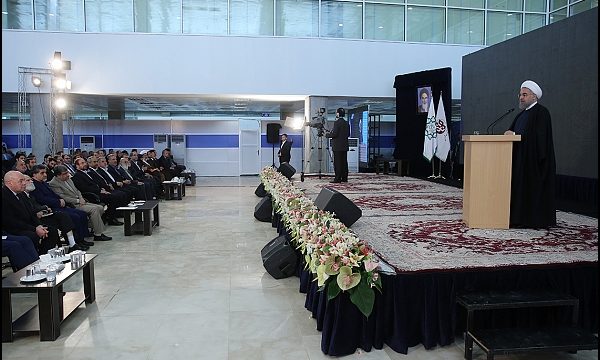 President: Culture is apex of affairs

Tehran, May 3, IRNA – President Hassan Rouhani said in the the post JCPOA era, Iran will reach its final destination with the help of culture, books and deep thinking.

Addressing the opening ceremony of the 29th Tehran International Book Fair on Tuesday, Rouhani said, ‘Culture is the apex of the affairs, economy and politics are not the only aims after JCPOA.’

Iran and world powers reached an agreement known as the JCPOA on July 14, 2015. As Iran’s peaceful nuclear program was verified by the International Atomic Energy Agency (IAEA), a statement announced ‘Implementation Day’ of the JCPOA as anti-Iran sanctions were lifted on January 16, 2016.

Today, it’s time to give freedom and security to the authors, and prepare conditions for the publishers for free competition, said the President.

‘Whether we want or not, we’ve entered a new era…the world in post JCPOA era is different from the one before that,’ he noted.

The Iranian President referred to meetings with world leaders and foreign officials as Iran’s success in the intensive nuclear talks that led to the JCPOA.

‘World trusts Iran completely,’ said the President, adding, ‘Trust is a social capital in the country, and an international asset in a global level.’

During an important historical event, the Iranian nation achieved great success in its talks with world powers, said the President, adding that both sides benefited the nuclear deal as well as the region and world.

However, some are filled with sense of loss dealing with that success, said he, adding 188 world states see fulfillment of their interests in that success, but very few do not, which is natural.’

Further, the President praised officials in charge of holding the Tehran Book Fair as well as the domestic and foreign guests attending the international event.

Tehran International Book Fair is to display domestic and foreign books as of May 4 for 11 days.

This year book fair has chosen ‘Tomorrow Is Too Late to Read’ as the motto for its 29th edition.