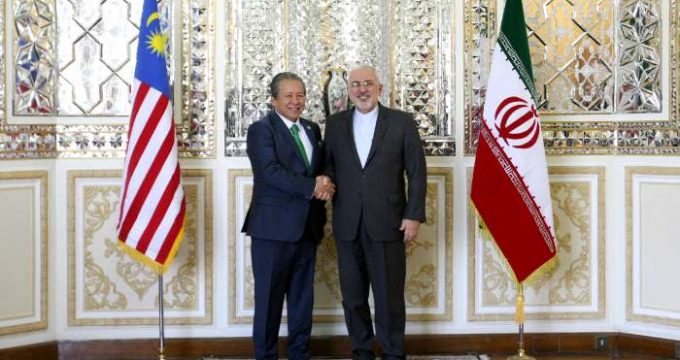 No restrictions to Iran-Malaysia relations: Zarif

“The Islamic Republic of Iran is ready to boost its all-out cooperation with Malaysia in all fields,” Zarif said in a meeting with Malaysian Foreign Minister Anifah Aman in Tehran on Tuesday.

He added that high-level delegations of many countries made visits to Iran after the implementation of last year’s nuclear agreement, dubbed the Joint Comprehensive Plan of Action (JCPOA), reached between Tehran and the P5+1 group of countries and created new opportunities for strengthening broad trade and economic cooperation.

He called on Iran-Malaysia joint economic committee to draw up new strategies to improve bilateral trade cooperation given the two countries’ great capacities.

Iran and the five permanent members of the UN Security Council – the United States, France, Britain, China and Russia – plus Germany started implementing the JCPOA on January 16. The two sides signed the agreement on July 14, 2015 following two and a half years of intensive talks.

Under the JCPOA, all nuclear-related sanctions imposed on Iran by the European Union, the Security Council, and the US would be lifted. Iran has, in return, put some limitations on its nuclear activities.

Zarif further said grounds have been prepared for Iran’s financial and banking cooperation with many European and Asian countries, adding Tehran and Kuala Lumpur can also enjoy the chance to expand relations in the banking sector.

Aman, for his part, said Iran and Malaysia have a positive prospect of improving cooperation.

The Malaysian foreign minister added that the two countries can boost cooperation in various political and economic sectors within the framework of the Organization of Islamic Cooperation.

He urged Tehran and Kuala Lumpur to take new steps in the energy sector after the lifting of sanctions against Iran under the JCPOA.