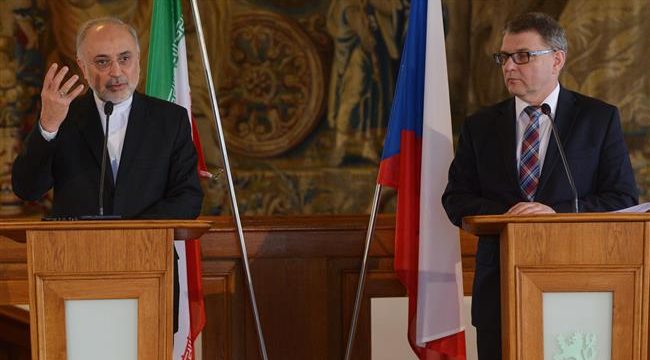 Head of the Atomic Energy Organization of Iran (AEOI) Ali Akbar Salehi has met with Czech Prime Minister Bohuslav Sobotka during his visit to Prague.

“The nuclear agreement showed that the only way to solve problems is through negotiations, and only talks based on good will result in a win-win,” IRNA quoted Salehi as saying on Monday.

Salehi noted that Iran and the Czech Republic have agreed to start a small number of joint projects and over time expand their cooperation in the field of nuclear technology.

He added that following the implementation of the Joint Comprehensive Plan of Action (JCPOA), Iran can now further develop its international relations in all spheres.

Iran and the five permanent members of the UN Security Council – the United States, France, Britain, China and Russia – plus Germany started implementing the JCPOA on January 16. The two sides signed the agreement on July 14, 2015 following two and a half years of intensive talks. Under the JCPOA, all nuclear-related sanctions imposed on Iran by the European Union, the Security Council, and the US would be lifted. Iran has, in return, put some limitations on its nuclear activities.

Salehi also stressed that the only way to end the foreign-backed crisis in Syria is an agreement by the conflicting parties.

He noted that if certain foreign countries “leave Syria alone,” the country will be able to settle its own problems. “Syria is entitled to its own independent decision making,” Salehi added.

In his turn, Sobotka noted that his country has kept ties with the Syrian government to help them in their battle against Takfiri terrorism.

Since March 2011, the United States and its regional allies, in particular Saudi Arabia, Qatar and Turkey, have been conducting a proxy war against Syria. According to a February report by the Syrian Center for Policy Research, the conflict has claimed the lives of over 470,000 people, injured 1.9 million others, and displaced nearly half of the pre-war population of about 23 million within or beyond Syria’s borders.

Emphasizing the need for boosting ties with Iran, the Czech prime minster motioned many fields such as energy, mining, and transport as potential niches for further cooperation.

According to the Czech Foreign Ministry, during his two day visit, Salehi is also scheduled to meet with the country’s Minister of Trade and Industry Jan Mládek and the head of its atomic agency. Salehi will also hold talks with head of the State Office for Nuclear Safety Dana Drábová.  “His visit will take place within the framework of the conclusion of nuclear agreement with Iran (JCPOA), subsequent easing of international sanctions and shared interest in boosting the Czech-Iranian relations.”