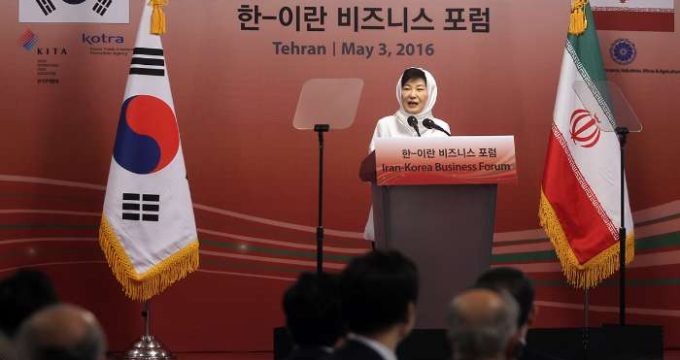 TEHRAN (FNA)- Tehran and Seoul signed over a dozen more cooperation pacts in the Iranian capital on Tuesday after the endorsement of 19 agreements on Monday.

A sum of 13 new memoranda of understanding (MoUs) were concluded between the private sectors of Iran and South Korea in the presence of the two countries’ presidents today.

The MoUs included mutual cooperation between Iranian and South Korean chambers of commerce, construction of 500-megawatt power plants in Zanjan, Neyzar and Bafq, development of the second section of phase 12 of South Pars gas field and construction of Ahwaz-Isfahan railway.

The MoUs were endorsed in Tehran on Monday in the presence of Iranian President Hassan Rouhani and his South Korean counterpart Park Geun-hye.

President Park, heading a high-ranking economic-political delegation, arrived in Tehran early on Sunday for talks on trade and economic cooperation.

She is accompanied by a 236-member delegation consisting of various cabinet ministers and a high-level business entourage.