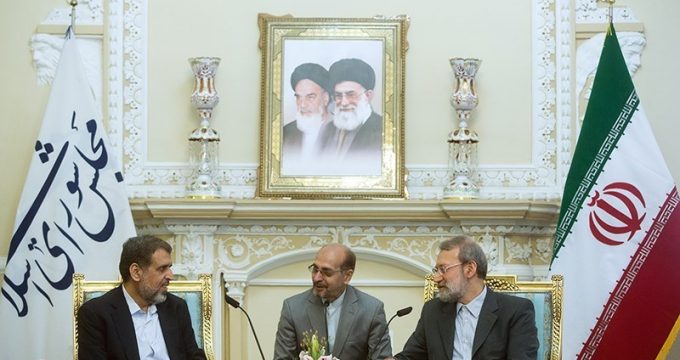 TEHRAN (FNA)- Iranian Parliament Speaker Ali Larijani in a meeting with Secretary-General of the Islamic Jihad Movement Ramadan Abdullah in Tehran on Tuesday stressed the necessity for the Palestinian people to continue Intifada against Israeli occupiers powerfully.

“Intifada is an important opportunity for Palestine and you should endeavor to keep this stream alive and God will help you on the path of Intifada until victory,” Larijani said.

He, meantime, blasted certain countries for their double-standard behavior in the region, and said they claim to be helping Palestine, but are actually after winning face and prestige this way.

Abdullah, for his part, appreciated Iran for its good positions and support for Palestine and Intifada, and said Intifada is the only way for Palestinians to gain freedom and get rid of their cumbersome situation.

He also referred to the Lebanese Hezbollah resistance movement’s power, and said the Zionist regime is well aware that war on Hezbollah is no way easy and incurs a very heavy price on the regime.

“All advocates of the Palestinian cause worldwide now share the view that the only way to victory and restoration of the Palestinians’ rights is to rely on people’s determination to continue Islamic resistance,” Shamkhani said in a meeting with Ramadan Abdullah in Tehran.

Shamkhani appreciated the Islamic Jihad for its resistance against the Israeli occupation, and said, “Israel was the strategic partner of the terrorist and Takfiri groups and supplied arms, medical and intelligence assistance to them to massacre Muslims and create differences among Muslim nations.”