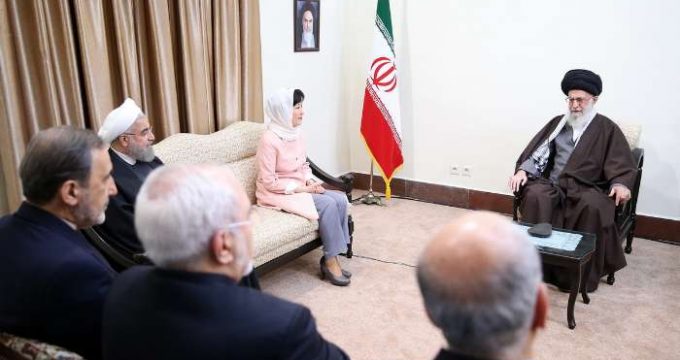 Tehran, Seoul must resist US malice in ties: Leader

Leader of the Islamic Revolution Ayatollah Seyyed Ali Khamenei says Iran and South Korea must build relations that are impervious to Washington’s spite and bias.

“The relations between Iran and South Korea must not hinge upon sanctions and must not be affected by the US influence and malice, rather the communications between the two countries must be sustainable, stable, strong and cordial’,” Ayatollah Khamenei said in a meeting with the visiting South Korean President, Park Geun-Hye, in Tehran on Monday.

“Such memoranda of understanding and contracts should be struck between the two countries that foreign factors and sanctions could not adversely affect them,” the Leader said.

Ayatollah Khamenei said the Islamic Republic maintains a positive view towards Asian nations, adding that Iran and South Korea will both benefit from sustainable ties.

“We believe that there is a greater prospect for understanding, agreement and cooperation with these [Asian] countries including South Korea which is among the advanced Asian countries,” the Leader added.

Ayatollah Khamenei also highlighted security challenges prevailing in the Middle East region and the world, saying: “If terrorism and insecurity are not tackled realistically and properly, countering them will become more difficult in the future and no country will be immune to this danger.”

The Leader dismissed Washington’s dichotomy of terrorism into “good” and “bad” categories, saying: “The US is chanting the slogan of combating terrorism, but it does not behave sincerely in practice while terrorism in any form is bad and is dangerous to nations and security of countries because without security, favorable progress will not take place.”

For her part, Park said Ayatollah Khamenei’s insistence on Iran’s economic, scientific and industrial development heralds a very good future for the country.

She said that her ground-breaking visit to Tehran provides a valuable opportunity for better ties between Iran and South Korea and will strengthen mutual confidence.

The South Korean president arrived in the Iranian capital on Sunday for a three-day official visit to discuss ways to strengthen political and economic relations between the two countries.