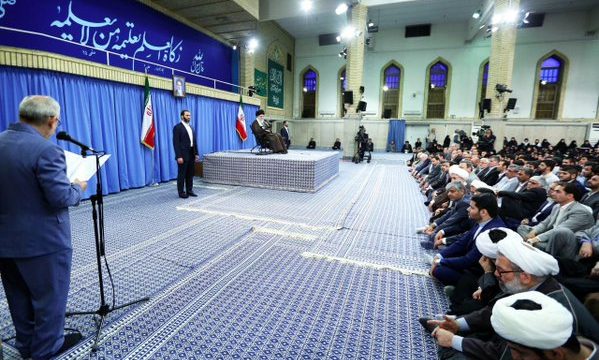 Tehran, May 2, IRNA – Supreme Leader of the Islamic Revolution Ayatollah Seyyed Ali Khamenei said on Monday that bringing up independent and noble generations with religious belief is among prime responsibility of education ministry and teachers.

Ayatollah Khamenei made the remarks in a meeting with thousands of enthusiastic teachers from various parts of the country.

‘If such an ideal society with such individual characteristics is formed, undoubtedy the theory of economy of resistance without reliance on oil revenue and resistance against hegemonic policies will come true,’ the Supreme Leader said.

Ayatollah Khamenei also lauded the invaluable efforts of teachers who have dedicated themselves in this path.

He said the community of Iranian teachers is doing a hard job with small means and minor income as educating young people is a very difficult task.

However, he said, officials should pay due attention to the living conditions of the teachers.

The Supreme Leader stressed the need to maintain the “independent identity” of young people and then educate them about economy of resistance.

Ayatollah Khamenei also gave guidelines on bringing up the next generations in line with the country’s demands.

‘Global arrogance is our rival that spares no efforts to create problems for education of next generations,’ Ayatollah Khamenei cautioned.

In fact, the arrogant powers have masterminded plans to deal with youngs generations of the world mainly the Iranian ones, said the Supreme Leader.

The US and Zionist capitalists and a number of arrogant states must be viewed as manifestation of ‘International Arrogance’, underlined the Supreme Leader.

The global arrogance tries to control the thought, culture, views and tastes of human generations in a bid to have intellectuals, politicians and all those who might have a say in the society under its control, Ayatollah Khamenei said.

Western intellectuals have time and again announced that instead of capturing countries based on 19th century colonial methods , it is better to apply a less expensive method i.e. injection of thought and culture into the minds of the youths around the world in such a way that their intellectuals act as pawns of the global arrogance, the Supreme Leader said.

Certain governments of the region toe the line of the arrogant powers, said the Supreme Leader adding that they do what the US wishes them to do, bear all costs and receive no incentive and the US in return only protects them and prevent their overthrow.

Denouncing promotion of Western culture, the Supreme Leader said that regretfully in some cases instead of English language instead of Persian language is promoted and this is done even in kindergartens.

‘We are not opposed to learning of foreign languages in Iran but the issue under question is promotion of foreign culture among children, young adults and adults,’ said the Supreme Leader.

In some foreign countries, they never let Persian language be taught easily but in Iran their languages and cultures are promoted which sounds irrational, Ayatollah Khamenei said.

The country’s power is not restricted to having access to weapons but other features such as science, faith, national characteristics, resistance and revolutionary identity should be taken into account, Ayatollah Khamenei said.

‘When enemies see your power and authority, they will withdraw from their stands,’ underlined the Supreme Leader.

The enemies are now uttering words which are bigger than their mouths and they claim that Iran should not conduct war games in the Persian Gulf region which is totally wrong and has nothing to do with them, the Supreme Leader said.

Persian Gulf is the home to all Iranian people and there is no doubt that war games will be conducted in that region and it is the Americans that should reply what are they doing in this part of the world, the Supreme Leader said.

Hegemons and arrogant powers should be dealt with in this manner, underlined the Supreme Leader.

‘Quran has taught us to prepare ourselves in such a way the enemies avoid confronting us,’ Ayatollah Khamenei said.

May 2, 2016
Iran, South Korea ink MoU on oil, gas cooperation
Iran’s coverage: Iran must dictate might to US in Persian Gulf: Leader