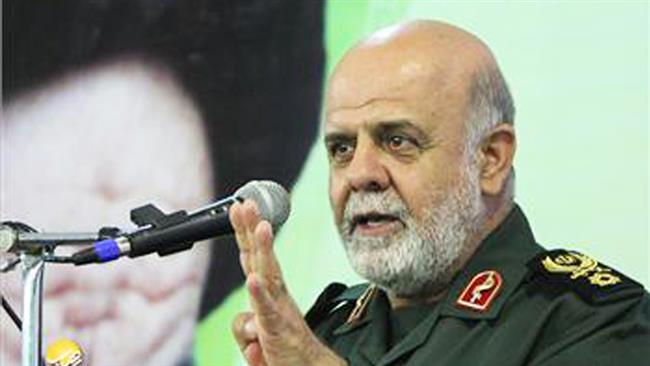 TEHRAN (Tasnim) – A senior adviser to the commander of the Islamic Revolution Guards Corps (IRGC) Quds Force said the extremist ideology of the Daesh terrorist group (ISIL or ISIS) is on the verge of collapse, expressing the hope that the Takfiri group would be destroyed soon.

Addressing a ceremony in the central city of Kashan on Monday, Brigadier General Iraj Masjedi pointed to the recent achievements of the Syrian and Iraqi forces in the fight against Daesh and the IRGC’ advisory role in the campaign, saying that many areas in the two Arab countries have been liberated from the terrorists.

“The declining trend” of Daesh has started in both ideological and military battlefields, the commander stated.

He further described Syria and Iraq as the frontlines of the fight against Iran’s enemies and expressed the hope that Takfiri currents, like Daesh, would be destroyed in a few months.

Iraq has also been facing the growing threat of terrorism, mainly posed by the Daesh militants, who made swift advances in much of northern and western Iraq over the summer of 2014, after capturing large swaths of northern Syria.

In the meantime, Iran has remained a close ally of Syria and Iraq and supports their legitimate governments in the face of foreign-backed militancy.

In June 2015, Iranian President Hassan Rouhani hailed the resistance of the Syrian government and people against foreign-backed terrorist groups in the Arab country, saying that Tehran is determined to side with Damascus to the end of the crisis.

Brigadier General Iraj Masjedi, Daesh, IRGC May 2, 2016
Spokesman: Iran will export heavy water to US only after being paid
What Iran’s first non-oil trade surplus means for its economy