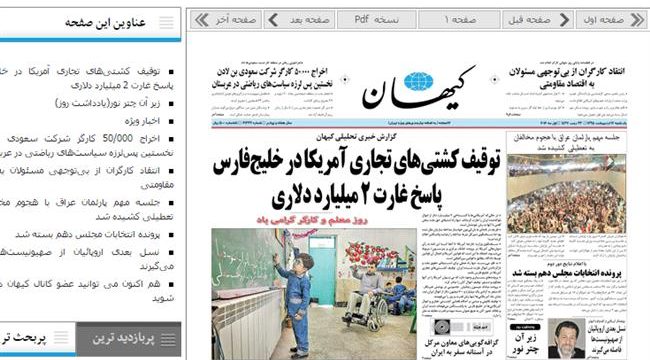 A leading Iranian daily has suggested the country intercept US cargo ships in the Persian Gulf in response to the American “looting” of Iran’s frozen assets.

The influential Kayhan newspaper made the suggestion on Sunday after Iran’s appeal to the UN to stop US violations of state immunity and seizure of the assets generated little hopes.

Iranian Foreign Minister Mohammad Javad Zarif wrote to UN chief Ban Ki-moon on Thursday to ask him to intervene with his “good offices,” but the United Nations said it would intervene should both parties request it.

Kayhan repudiated the UN for putting a “condition” for its assistance, saying the body is “apparently not aware that the main problem is the ‘condition’ itself.”

“How can one expect a side, which has stolen Iran’s assets, to submit to the court or the United Nations and seek trial?” the paper asked.

A US official has made clear that Washington saw no need for UN involvement, Kayhan pointed out.

“A look at various cases will plainly show that the Americans do not have the slightest regard for international institutions and laws and for their obligations,” it said.

“The confiscation of Iranian assets since the beginning of the (Islamic) Revolution, failure to fulfill the Algiers Accords in addition to virtual sabotage of and reneging on the JCPOA are just a few examples.”

The Algiers Accords were brokered in January 1981 when the US undertook to remove a freeze on Iranian assets and trade sanctions on Iran and not intervene in the country’s internal affairs among others.

Under the JCPOA – as the July 2015 nuclear agreement was called – the US accepted to remove sanctions on Iran. Washington, however, has imposed new sanctions on Tehran since than and blocked Iranian access to its financial system.

Kayhan said, “Among many things, it seems that the only practical way to reclaim the rights of the nation and repatriate Iran’s looted assets is to intercept American cargo ships in the Persian Gulf.”

The paper said there were many cases in which the US can be convicted and have its assets confiscated.

“The case of swapping Jason Razaian – the spy under the guise of journalist – which resulted in the release of $1.7 billion of Iranian assets showed that the Americans only understand the language of force and power,” it said.

“Legal confiscation of American cargo vessels and assets in the Persian Gulf as per judicial decisions, apart from the material value of the impounded property which it has, will teach Washington that contrary to its thinking Iran’s hands are not tied at all and the country is capable of retaliation.”

Kayhan said Iran’s retaliation will “protect more Iranian assets from possible US robbery and pave the way for their repatriation.”

“This practical step is not difficult for the Islamic Republic of Iran to take; it only needs a will and determination,” it added.

Last month, the US Supreme Court ruled that almost $2 billion in frozen Iranian assets must be turned over to American families of people killed in the 1983 bombing of a US barracks in Beirut and other attacks.

Iran has dismissed any role in those attacks and denounced the rulings as arbitrary.

The country, meanwhile, had challenged a 2014 ruling by a New York-based circuit court of appeals that the frozen assets should be handed over to the more than 1,000 American plaintiffs.

After the case moved to the Supreme Court, the Obama administration urged it not to overturn the decisions of circuit and appeals courts to award the plaintiffs.

In 2012, President Barack Obama issued an executive order blocking all of Central Bank of Iran’s assets held in the US in order to prevent Tehran from repatriating them.

At the same time, Congress passed a law which included a provision making it easier for the Americans to use Iranian funds frozen in the US.

US Chief Justice John Roberts has criticized the ruling, saying Congress was “commandeering the courts to make a political judgment look like a judicial one.”

The ruling came following January’s implementation of a landmark accord reached last year by the US and five other powers to lift sanctions on Iran.

Since then, Obama has signed a Congress bill aimed at limiting tourist travels to Iran. The US has also imposed new sanctions on Iran over its recent missile tests which are not banned under the nuclear deal.

Iranian officials say US has maintained its hostile policies toward Tehran despite the nuclear agreement.

On Wednesday, President Hassan Rouhani said the expropriation of Iranian assets amounted to “blatant theft” and indicated “hostility” toward Iran.

Rouhani warned that the US would have to face up to “all the consequences of this illegal action,” without elaborating.

“The move indicates Washington’s continued hostility against the Iranian nation,” Rouhani said during a Cabinet meeting.