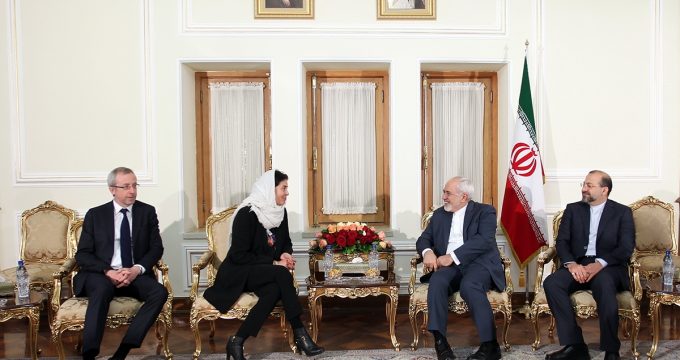 Iranian Foreign Minister Mohammad Javad Zarif made the remarks in a meeting with President of the Senate of Belgium Christine Defraigne here on Saturday, exchanging views on the latest ways to expand bilateral ties and the development of regional issues.

Touching upon the latest status of JCPOA implementation, the Islamic Republic of Iran has seriously committed its obligations expecting the same from its European partners on their behalf.

“We face common global and regional challenges, including terrorism and extremism, a cursory examination of which correctly concludes that their approaches are drawn from a unique source of inspiration and thought which feed the extremist and terrorist ideas and provide them with power supplies,” Zarif noted.

Pointing to the Syrian crisis, Iran’s foreign minister said hostile approaches has deteriorated the ongoing crisis in Syria, provoking al-Nusra and ISIL terrorist groups to be prepared to sabotage and violate the ceasefire, through financial and military sources provided for them in the region.

Christine Defraigne, for her part, underlined the need for developing bilateral relations between Iran and Belgium, especially in parliamentary, economic and political fields.

“Islamic Republic of Iran as a major influential actors in the region has always played a pivotal role in establishing peace and stability in the region, and we need to raise diplomatic capacity of the two countries and take steps towards finding effective solutions for the regional issues.

Pointing to the constructive results of Dr. Zarif’s recent visit to Brussels, Defraigne underlined the need for continuing the talks, and strengthening relations between the two countries at all levels.