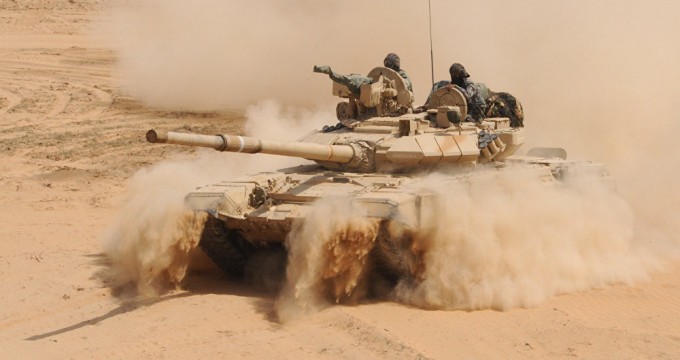 Russia announced on Thursday that it is considering a plan that involves the licensed production of T-90 tanks in Iran in what could mark a new chapter in strategic relations between the two countries.

The announcement has been made by Vyacheslav Khalitov, the deputy general director of the UralVagonZavod (UVZ) which is the largest battle tank manufacturer in the world.

Khalitov has been quoted as saying by Interfax news agency as saying that the project to produce T-90s in Iran will go ahead as soon as there is a proposal from Tehran.

“We are ready, if the customer wants it,” Khalitov said.

Iran has already purchased Russia’s S-300 missile defense systems for $800 million and has started to receive the early batches of the system which will be fully delivered over the next months.

Iran’s Defense Minister Hossein Dehqan left for Moscow on Tuesday to discuss the delivery of S-300 as well as several other issues of mutual interest.

Iran’s Embassy in Moscow has announced in a statement that Dehqan is expected to discuss purchases of Russian Sukhoi Su-30 fighter jets and T-90 tanks during his visit.

Sources close to the Russian government said at the time that Iran’s Defense Minister Dehqan was to visit Moscow later in February to discuss new sales contracts that were collectively estimated to be around $8 billion.

“Iran would like to buy Russia’s latest S-400 Triumph anti-aircraft missile system, developed by Almaz-Antey. And they make no secret of it. On the eve of his visit to Moscow Dehghan openly said to Iranian media they want to purchase the S-400s,” Interfax quoted a source close to the Russian government as saying.

According to Interfax’s source, the second important topic of Dehqan’s talks in Moscow was expected to be Tehran’s possible procurement, or even a licensed production of the new Russian Sukhoi Su- 30SM multi-role fighter.