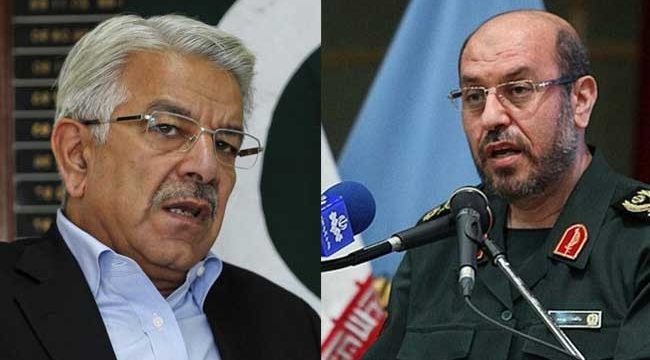 Moscow, April 28, IRNA – Defense Ministers of Iran and Pakistan in a bilateral talk on the sidelines of Moscow Conference on International Security discussed importance of border security and necessity to take appropriate decisions in this area.

Iran’s Brigadier General Hossein Dehqan in a meeting with his Pakistani counterpart Khawaja Mohammad Asif said that the US-Israeli dangerous trend in the region, disfavors improvement of ties and convergence among regional countries.

He said that Pakistan as a friendly neighboring country of Iran can play a very effective and constructive role in settling regional crises.

Defense Minister of Pakistan Khawaja Mohammad Asif underlined expansion of relations and removing obstacles and promotion of relations level and said that Iran as an ancient country with bright civilization has plenty of capacities and capabilities, which could be so useful an effective for Islamic world.

Noting that situation in borderlines has remarkably improved, he said both sides should try not to allow radical groups to endanger security and stability neither in borders nor inside the countries.

He called elimination of sanctions against Iran as a very good opportunity to expand ties in all fields, especially in defensive and security affairs.

2016 MCIS conference, dehqan visit to Moscow, Khawaja Muhammad Asif April 28, 2016
US to fail in military conflict against Iran, says Malaysia’s Mahathir
Iran not to send pilgrims to Hajj if conditions not met: Minister