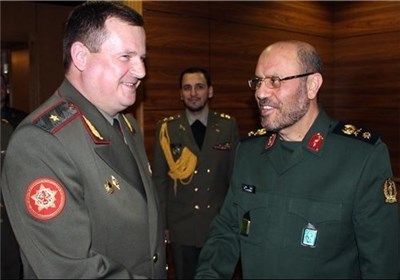 In the meeting, Dehqan said that European Daesh elements are a potential danger against world security and added that the US by taking war mongering strategy of proxy wars intends to control new emerging powers and is to impose its expenses on shoulder of its dominant states.

In the meeting, the two ministers discussed bilateral issues and international , regional situations.

Dehqan said that there are appropriate capacities and grounds for mutual cooperation, especially in defensive-security issues, which by activation of them mutual interactions will be promoted desirably.

He said that message of this conference in Moscow could be a firm warning to the US and its allies that world would not allow continuation of such inhuman strategies and independence countries and regional big powers by their unity and all-out cooperation will stand against influence and expansionism of Washington.

General Ravkov called Iran’s role in fight against terrorism very valuable and said his country is ready to use this experience of Iran.

He said that Belarus believes in special importance for its ties with Iran and underlined more expansion of defensive – security cooperation between Tehran and Minsk.

Defense Minister Hossein Dehqan, who was in Moscow to attend the 5th Moscow Conference on International Security, met with his counterparts from Russia, Belarus, Afghanistan, Pakistan and Armenia and returned home Wednesday evening.

The conference was held by participation of 500 defense ministers, deputies ministers, chiefs of staff of armed forces as well as experts from different countries.