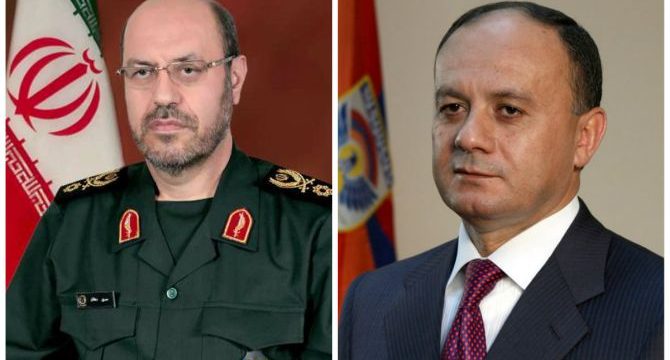 Moscow, April 27, IRNA- Iran’s Minister of Defense General Hossein Dehqan, who is in Moscow to participate in the Moscow Conference on International Security, met his Armenian counterpart Seyran Ohanyan.

In the meeting, both countries’ defense ministers negotiated on Tehran-Yerevan cooperation and the regional conditions.

Both sides emphasized the importance of stability and peace in the region and reminded countries’ convergence to de-escalate tensions as important.

The escalation of tensions between Baku and Yerevan over Karabakh region and military conflict in their border lines on April 2 led to exchange of fire and killing of a number of Azeri and Armenian soldiers; later, the two sides agreed on a truce with Russia’s attempt.

The Fifth Moscow Conference on International Security opened on Wednesday in the presence of 500 participants, including ministers and deputy defense ministers, chiefs of armed forces staffs and experts from many countries.

The meeting is to discuss campaign against terrorism, security issues in Asia and the Pacific, global stability and military cooperation.

In addition to fighting against terrorism as the main topic of the conference, Asia and Pacific Ocean security issues, world stability and military cooperation have been announced as other topics to be discussed in this event.