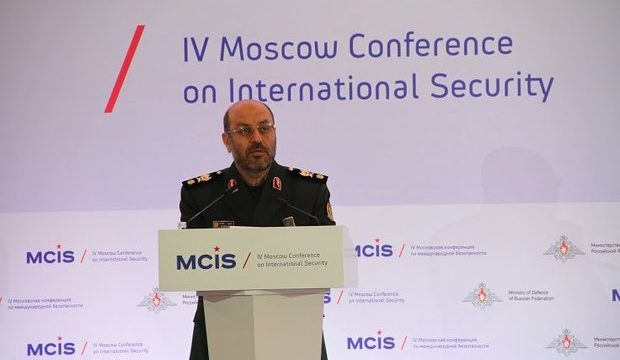 TEHRAN, Apr. 27 (MNA) – Iran’s defense minister has addressed the 4th Moscow Conference on International Security.Brig. Gen. Hossein Dehghan who was addressing the meeting in Moscow on Wednesday, expressed thanks to his Russian counterpart for inviting Iran for an international meeting on security; “I would like to thank Russian Defense Minister Sergei Shoigu for hosting the conference,” he added.

“In the last year’s edition of the conference, I had warned about spread of terrorism and militancy in the Middle East, Caucasia, Central Asia, India, western China, and Europe. Now, we see that terrorism and extremism have improved themselves, reaching their culmination in virtually all regions with heinous crimes and mass killing of Muslims and non-Muslims alike; surprisingly and unfortunately, some governments of the region have continued their support in resources, logistics, and arms to these fundamentalists,” Dehghan told the meeting.

“We believe political despotism, poverty, destitution, and political vassalage to great powers outside the region who at the same time act as proxies of these powers contribute to the vicious circle of terrorism and social and political under-representation and denigration of nations; the confounding factors are ethnoreligious hatred and conflict of interests which invite foreign intervention,” he emphasized.

“Double-standards in dealing terrorism by the US and its allies and in justification of their interests in the region is another important contributor to this circle; these conducts, we believe, will precipitate the conditions very similar to those preceding world wars,” Dehghan added. “Realism however would provide some solutions to this question of looming global conflict and other questions; in a world of insecurity, instability, and rife with horrors of terrorists’ crimes, the US and Zionists have been seeking their own interests.”

“The Islamic Republic of Iran systematically opposes any militarization of the outer space as violating the principles of international peace and stability and of unrepairable damage for all nations,” he emphasized, voicing the same opposition to proliferation and stockpiling of weapons of mass destruction across the globe. “We believe the Zionist regime is a threat to international peace and that the NPT members should be motivated enough to promote international peace and a world free of nuclear weapons,” he concluded.