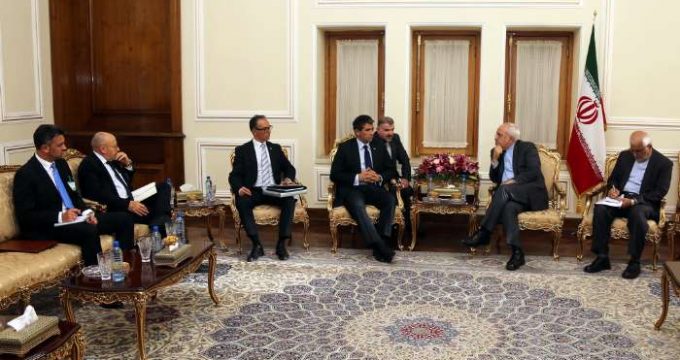 “We in the foreign ministry are considering deepening of relations in all areas with the Latin American countries,” Zarif said in a meeting with Uruguay’s Vice President Raul Sendic Rodriguez in Tehran on Monday.

He reiterated that Iran and Uruguay can boost their continuous consultations on regional and international developments.

Meantime, the Iranian foreign minister said that lifting the sanctions imposed on Iran’s banking sector will provide an opportunity for the two countries to strengthen their economic cooperation.

Rodriguez, for his part, said that Uruguay supported Iran during years of sanctions and expressed hope that the two countries would take effective steps in line with common interests and expansion of relations following the implementation of Iran’s nuclear agreement with world powers.

The Uruguayan vice-president went on to say that senior Iranian and Uruguayan officials agreed to hold a meeting of joint economic committee in a bid to define banking strategies and boost cooperation in the sectors of heath, foodstuff, energy and sports.

Sendic’s visit to Tehran is aimed at expansion of bilateral relations in economic and trade fields.

In line with that aim, Sendic is due to meet with top Iranian officials, including President Hassan Rouhani.