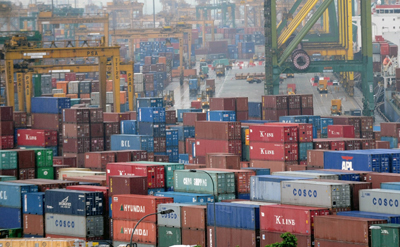 A South Korean official has expressed his country’s readiness to invest in Iran’s fast-growing shipping industry as well as ports.

Head of South Korea Maritime Institute Sang Gui Kim has told reporters during his recent visit to Iran that the country has high capabilities in the oil and gas sectors and that Seoul can cooperate with Tehran on shipbuilding , maintenance and repair of naval fleet and preparing ports for operation, Iranian media reports say.

The Korean official, who was speaking on the sidelines of Iran-South Korea Economic Conference in the central Iranian city of Isfahan, added that the two sides could also work on developmental projects, dam construction, control of water resources and the health sector.

He also expressed hope for the volume of South Korea’s investment in such areas to rise to 10 billion dollars within five years.

The comments come ahead of a planned visit to Iran by South Korean President Park Geun-hye next month, where she will hold discussions with the country’s senior officials on a wide range of issues.

Heading a high-ranking politico-economic delegation, Park is set to start her three-day visit to Tehran on May 1 at the invitation of Iranian President Hassan Rouhani, Iranian president’s deputy chief of staff for communications and information, Parviz Esmaeili, said on Monday.

The Iranian and South Korean presidents are set to exchange views on the expansion of mutual relations in different fields and important regional and international developments, Esmaeili added.

Energy-hungry South Korea, the world’s fifth largest crude oil importer, is one of the largest buyers of Iranian oil.

Its import of Iranian crude soared 81 percent in March year-on-year, after Iran and the P5+1 group of countries started to implement a nuclear agreement, dubbed the Joint Comprehensive Plan of Action (JCPOA), on January 16.

After the JCPOA went into effect, all nuclear-related sanctions imposed on Iran by the European Union, the Security Council and the US were lifted. Iran, in return, has put some limitations on its nuclear activities.