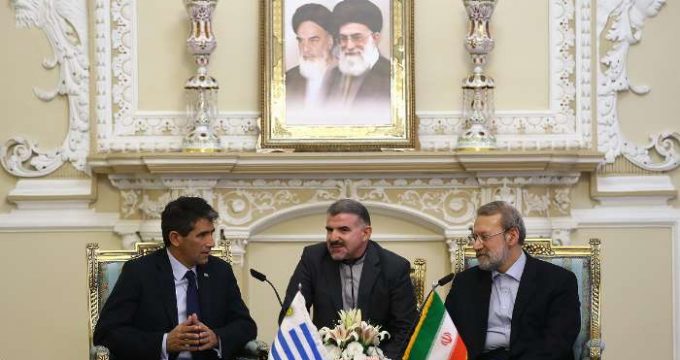 Larijani: Nations rights not to be disregarded by imposing pressures

Tehran, April 25, IRNA – Majlis (parliament) Speaker Ali Larijani said that the Iranian government’s policy is to defend Iranians rights to gain access to peaceful nuclear energy and stressed that by imposing pressures no one can disregard nations rights.

He made the remarks in a meeting with Uruguayan Vice-President and Head of both parliaments of Uruguay Raul Sendic here on Monday.

Larijani supported expansion of economic and trade ties with Uruguay, and said that businessmen of the two countries by awareness and knowledge about situations in the two countries may facilitate such relations.

Concerning the existing crises in the Middle East and its impacts on the European countries, Larijani said that all world countries should use their international capacities to restore security to these states so that to prevent terrorism problem and prevent immigration to other countries, especially European states.

Raul Sendic said that Iran and Uruguay are both in crisis–hit regions, but type of crises is different in the two regions.

He felicitated Iran for its nuclear deal and said that Iran could leave behind crises and sanctions with might and defend the Iranian nation’s rights.

Sendic called for expansion of trade relations and exchange of crude oil with agricultural and livestock products.