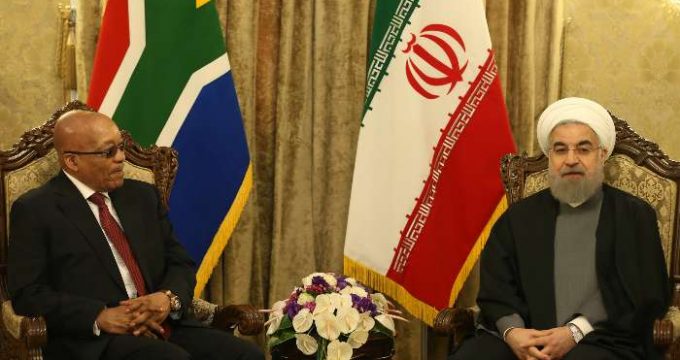 TEHRAN (FNA)- Tehran and Pretoria in a joint statement issued at the end of South African President Jacob Zuma’s official visit to Iran underlined the need for fast growth in expansion of ties and mutual cooperation.

Iran and South Africa underlined broadening their bilateral ties in different areas in their joint statement.

The full text of the joint statement follows:

In the Name of God, the Beneficent, the Merciful

At the invitation of His Excellency Dr. Hassan Rouhani, President of the Islamic Republic of Iran, H.E. Mr. Jacob Zuma, President of the Republic of South Africa, paid a state visit to the Islamic Republic of Iran from April 23rd to 25th, 2016 corresponding to 4th-6th of Ordibehesht 1395. H.E. Mr. Jacob Zuma was accompanied by several members of his Cabinet and senior officials of government as well as a large delegation from the private sector.

2- In his talks with H.E. Dr. Hassan Rouhani, H.E. Mr. Jacob Zuma conveyed warm greetings and a message of friendship from the people of South Africa to the people of the Islamic Republic of Iran.

3- During the visit, the following Molls were signed by the two sides:

Bilateral Cooperation in the Agricultural sector

Cooperation between PetroSA and the Research Institute of Petroleum Industry (RIPI)

Cooperation in Trade and Industry

Cooperation in Arts and Culture

4- The two sides held fruitful discussions on a wide range of bilateral, regional and international issues:

The discussions between the presidents, ministers and senior officials of the two countries were held in the spirit of friendship. Both sides expressed satisfaction with the current status of strong bilateral relations and the two presidents called for the further strengthening and deepening of relations in the political, economic, scientific, energy, and socio-cultural fields.

The two presidents emphasized the importance of regularly exchanging high-level political, economic and cultural visits between their countries in order to further strengthen their bilateral ties. They also emphasized the need for continued consultations, to keep each other informed of their respective positions on regional and international developments, including consultations on multilateral issues.

Both parties reflected on the huge potential to scale up two-way trade. They directed their senior officials to implement the Roadmap on Trade and Investment and expressed the desire for two-way trade to reach USD 2 billion by 2020.

Both sides also held further discussions to explore collaboration in the financial sector, including the re-establishment of banking relations. They also discussed the exploration of collaborative initiatives in the oil and gas sector.

Recognizing the critical importance of water resource management, both parties agreed to explore collaboration in a wide range of issues in the water sector.

The presidents also held discussions to collaborate on constructive interactions in Science and Technology.

Both parties expressed the desire to broaden people-to-people interactions and to scale up two-way tourism, including exploring direct flights between South Africa and the Islamic Republic of Iran. Both parties emphasized on the need to explore cooperation in the fields of shipping and maritime transport.

The two sides agreed to co-operate in the maintenance of peace and security in Africa. South Africa took note of the Islamic Republic of Iran’s commitment to assist with Africa’s Development Plan.

On regional and international issues, the two sides underscored the need for continuing consultations and the exchange of views between officials of the two countries and their representatives in international organizations, in line with enhancing international cooperation.

The two sides, based on their shared goals, in ensuring that the Middle East is a region of peace and security, called on the international community to support the peaceful resolution of the conflicts in Syria and Yemen. Both sides emphasized their continued support for the Palestinian cause.

The Islamic Republic of Iran and the Republic of South Africa noted that the respect for human rights and fundamental freedoms should be a priority and not an option. In this regard, both sides agreed to have regular consultations on human rights issues at both bilateral and multilateral levels. Both sides agreed to activate the agreed upon structured Human Rights Dialogue before the end of 2016.

Both parties stressed the importance of other partners and the related international organizations in fulfilling their obligations and commitments under the agreement. Both parties also noted that the implementation of the JCPOA and that the continued cooperation between the Islamic Republic of Iran and the IAEA clearly demonstrated the value of diplomatic solutions in resolving differences. South Africa recognizes the Islamic Republic of Iran’s right to develop a nuclear program for peaceful purposes. South Africa also stressed the need for the lifting of all remaining unilateral sanctions.

The two sides expressed their deep concern on the severe consequences of terrorism on peace, security and development. They agreed that terrorism and its negative consequential impact, has no geographic boundaries and called upon the international community to work towards consensus building in eradicating all forms of terrorism and to work in a collaborative spirit in fighting terrorism globally.

5- At the conclusion of the visit, His Excellency Mr. Jacob Zuma, expressed his gratitude for the warm and generous hospitality extended to him and the South African delegation, including the warm reception received from the Governor of Isfahan during the visit to the historic city of Isfahan. His Excellency President Zuma extended an invitation to His Excellency Dr. Hassan Rouhani to pay a state visit to South Africa at his earliest convenience.

Done on 24th April, 2016. (Corresponding to 5th Ordibehesht, 1395 in the Iranian Calendar) in two copies, English and Persian languages, both being equally authentic.