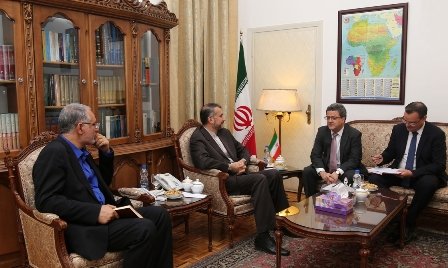 Amir-Abdollahian and Swiss Deputy Foreign Minister Yves Rossier discussed the latest developments in the region, especially in Iraq, Syria and Yemen, during Monday meeting in Tehran.

Iranian diplomat said the Islamic Republic of Iran supports Bashar Assad as a Syrian legal president and Syrian nation as the real and major possessors of the country, who deserve the right to make decisions without the involvement of foreigners.

He described the efforts made by some armed groups in Syria an obstructive approach in violation to the ceasefire agreement that could disrupt the process of political negotiations.

Iran’s deputy FM said the Islamic Republic of Iran has welcomed the strengthening of ceasefire and political dialogue in Yemen, while also stressing the seriousness in the fight against terrorism in Yemen.

Yves Rossier, for his part, examined the Syrian developments and highly regarded Iran’s role in the resolution of crisis in Syria.

While reaffirming the necessity of political dialogue as the only solution to the crisis in Syria, Rossier underlined the need for the continuation of the ceasefire and political negotiations in Geneva.