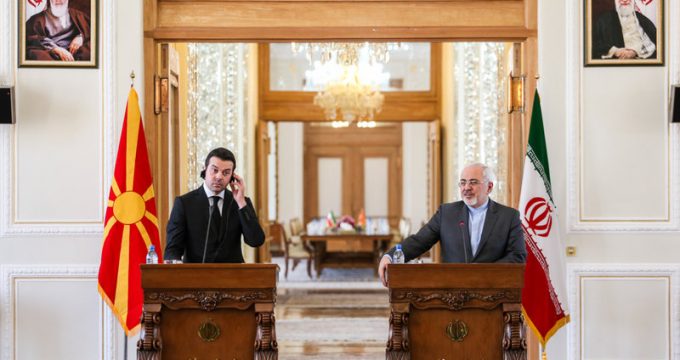 TEHRAN (ISNA)- Iranian Foreign Minister Mohammad-Javad Zarif reiterated that the US is responsible for protecting Iranian assets, adding that the country would claim on damages in case of any encroachment on the property.

“We are doing our best to prevent US encroachment on our properties,” he said in a joint press conference with Macedonian Foreign Minister Nikola Poposki here in Tehran.

His remarks came after a recent US court ruling which seized $2 billion of Iranian assets.

Zarif reiterated that Iran does not recognize the court ruling, and believes that any encroachment on Iranian assets is illegal.

He said that Iranian government has decided to form a special commission to pursue the issue legally.

The Iranian official also referred to boosting bilateral trade ties between Iran and Macedonia, and said, Iranian private sector can join Macedonian technical and engineering projects as well as infrastructure plans and other commercial fields

Mohammad Javad Zarif, Nikola Poposki, US April 25, 2016
A Look at Iranian Newspaper Front Pages on Apr. 25
Spokesman: Zarif met with a number of US Congressmen in New York