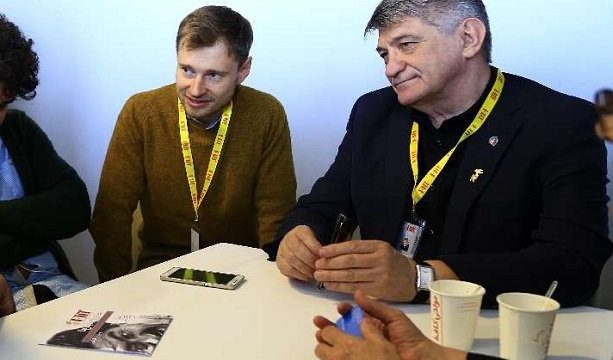 TEHRAN, Apr. 23 (MNA) – Russia’s most distinguished filmmaker Alexander Sokurov believes that film festivals, with their emphasis on shared humanistic and cultural values, shed further light on the senselessness of war.

I never thought I would have one day met Russia’s most distinguished living filmmaker in person. But thanks to Fajr International Film Festival currently underway at Charsou Cineplex in central Tehran, I did get a chance to talk to Alexander Sokurov, a Golden Lion winner at Venice for his film ‘Faust’ (2011), and the director of a one-shot feature film Russian Ark (2002) which was supported by Martin Scorsese. He is also known for his emotional drama ‘Mother and Son’ (1997) which has brought tears to many eyes through its beautiful portrayal of profound emotional and spiritual ties between an old, dying mother and her young son. I found him at one of the booths reserved for interviews, already deep in conversation with another correspondent, conducted via a translator.

The Russian filmmaker talked about ‘Mother and Son’, and his special attention to ‘ethics’ in making a movie; “if you want to make an artistic film, you should take care that it be something apart from the ordinary life,” said Sakurov among reporters at Charous Cineplex. “In every part of the world, the films made about young people are very close to reality, but this realism does not completely answer the existing issues. One should seek the solution in aestheticism. The filmmaker should look for new ideas and pictures to better express his/her intention, and take a step back from presenting a picture of the real life on the screen.”

This comes from the director who is known for his extensive use of poetic imagery and spiritual allusions. I find it to be very good advice. The bulk of Iranian cinema is social realism, and the audience seem to be reacting favorably to the films that come the closest to depicting the real life. The more real and lifelike the film and characters, the more praise the audience would lavish on the filmmaker. But cinema should be first and foremost a mode of artistic expression, not a ‘mirror held up to nature.’

“If the modern cinema does not pay attention to fine art and subtle aesthetics, it fails to bring anything new to the world,” he stressed.

Sakurov once called himself more of a literary person than a cinematographic person, and perhaps it is his vast interest in the world of literature that allows him to prioritize aesthetics over anything else. And if his successful career as a filmmaker is anything to go by, this has worked greatly to his advantage.

In the flurry of activities and commotions surrounding us, I managed to spark a short conversation with the leading director who thinks film festivals present a golden opportunity to bring into light the glaring fact that humanistic and cultural values are shared across borders and under this brilliant light, all wars are rendered senseless, because ‘how crazy is that, to war against yourself?’

Mr. Sakurov, what do you think about the role of cinema in dissolving the barriers of language and culture?

Cinema itself is the culture and language, with no barriers between them. These are what the cinema consists of. (Points to a mug of coffee on the table) this is coffee but it consists of water, sugar and coffee, so the cinema is the same. It’s made of culture and language, besides many other components that shape it into what it is. In essence, language is more than language; it encompasses intonations, emotions, communication, and education.

So putting that question into the context of international film festivals, how do you see their role in introducing a nation’s culture to an audience that is either uninformed or misinformed about it?

That depends a lot on the auteur. If the auteur sticks to the humanistic values in his works, sure, the film can lend a lot to giving an accurate picture of a nation’s culture to outside viewers. Because where else [could filmmakers do that] if not in film festivals? Such a festival says we have more humanistic and cultural commonalities than whatever divides us. The existing of such a festival says that the war is senseless because we are warring against the same thing that we are also a part of. And isn’t it crazy? To war against yourself? In one trench, there are people who are shooting others in another trench, merely because somebody told them to shoot.  But who is this somebody that pities people of the same humanistic values against one another?

Which three films would you recommend to an Iranian audience who knows nothing of Russia and wants to watch some cinema to learn about it?

Well It’s very complicated. We have a lot of good movies in Russia. I would recommend Iranian audience to watch ‘Ballad of a Soldier’ (Grigory Chukhray, 1959), or ‘The Asthenic Syndrome’ (1989) by Kira Muratova. It is actually easier for me to pick something from the international cinema than our national cinema, because in the national cinema, there are inner motivations and some national codes that a foreigner cannot understand. For example, I laugh at the ‘Ballad of a Soldier’ but you will see the movie and ask me what was that? (laughs)

What about your own top three favorite films?

I like ‘Man of Aran’ (1934) by American filmmaker Robert Flaherty, ‘Strike’ (1925) by Russian auteur Sergei Eisenstein and ‘Fighting Soldiers’ by Japanese filmmaker Fumio Kamei, which was made in the 40s.

And what of Iranian movies? Do you have any favorites?

I do have several favorites, but I won’t say what they are (laughs). Because I like Iranian cinematography as it is, as a whole. I don’t want to name any specific film as Iranian cinema is something united in my head. I actually know one of the Iranian filmmakers on a personal level but he doesn’t like me (laughs).

And what would you say are the main differences in themes and style between Iranian and Russian movies?

We have more diversity of genres, and no religious restrictions. And we have a wider historical past. We also keep on thinking that we need more young filmmakers in the Russian film industry, and this is a problem that I don’t think exists in Iran.

The 34th Fajr International Film Festival is currently underway at Charsou Complex, Tehran, and will run until April 25, 2016.

Sokurov is participating in the 34th FIFF with his new feature, Francofonia (2015), which will be screened on Sunday and Monday at Charsou Cineplex. Coproduced by the Louvre, this documentary dramatic feature is preoccupied with the Louvre during the Second World War.