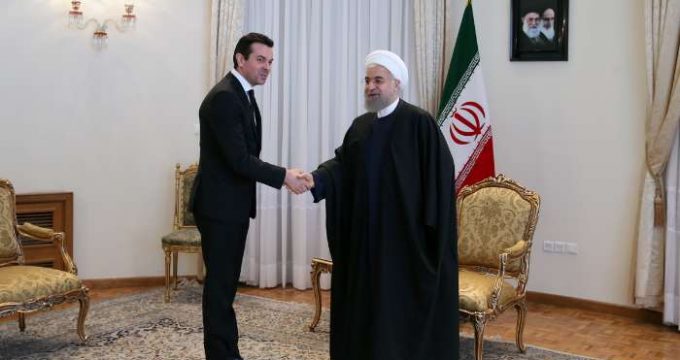 Cultural coop. to stir up expansion of ties with Macedonia

TEHRAN, Apr. 25 (MNA) – President Rouhani said that Iranian companies and the private sector activists are ready to implement projects in Macedonia, stressing that there is no obstacle in the way of expansion of all-encompassing ties between Tehran and Skopje.

Speaking during the meeting with Minister of Foreign Affairs of the Republic of Macedonia Nikola Poposki on Monday, Rouhani said the volume of trade between Iran and Macedonia shows the two countries have not used their capacities and capabilities.

He insisted that Tehran and Skopje need to properly utilize the opportunities in the new era, to encourage further cooperation.

Pointing to Poposki’s remarks over the opening of Macedonian Embassy in Tehran, Rouhani said with the introduction of joint capabilities and capacities to the private sector in both countries, a new situation will be created in relations between Tehran and Skopje.

President Rouhani pointed to the progress and technical, engineering capabilities of Iran in all fields of construction of roads, dams and power plants, noting Iranian companies are active in many countries; they can successfully run the projects in Macedonia in competition with other companies.

Rouhani outlined that cultural cooperation and mutual visits between the two countries is a key factor to build momentum in the development of relations.

Macedonia’s foreign minister also stressed that Skopje is determined to expand and deepen mutual relations with the Islamic Republic of Iran, and in this regard soon will open its embassy in Tehran.

Pointing to his talks with Iranian officials, Poposki said the grounds are provided for the rapid development of cooperation between Tehran and Skopje, adding the presence of a large delegation of Macedonian businessmen in Tehran reflects our determination to develop further ties.

Touching upon the issue of terrorism and the need to a collective campaign against the crisis, Poposki said, “Unfortunately Europe was unaware of the problem for a long period; the fight against a phenomenon that has created a common concern for the international community, requires coordination and efforts of all countries.”