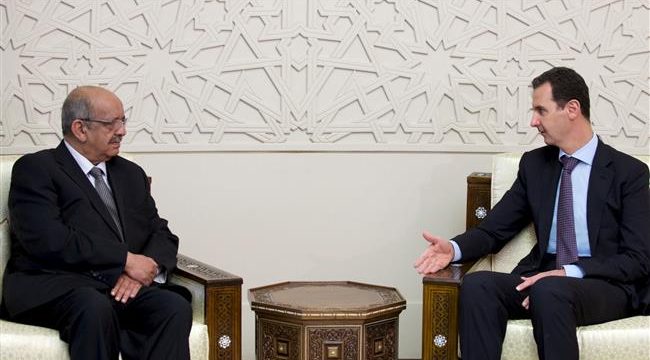 The meeting was held on Monday, with President Assad thanking Algeria’s minister for the Arab League Abdelkader Messahel for the African country’s support of Damascus in the five-year-long conflict in Syria, the official SANA news agency reported.

They discussed about the “danger of terrorism and the need for unifying the efforts of all countries to fight this danger,” SANA reported.

Assad said that terrorism is not a local issue anymore as it has become part of a political game to undermine independent states.

The Syrian president also said his country is in a better situation and that the Syrians are committed to continuing the fight against terrorist groups in Syria.

Messahel also expressed Algeria’s solidarity with people in Syria and their commitment to fight against terrorist groups.

Messahel told reporters after the meetings that Algeria supports the policy of not interfering in the affairs of other countries and said his country seeks political solution to the Syrian crisis.

The visit came as the government in Damascus is growing in strength and confidence while Takfiris and other militants backed by the West, Saudi Arabia and their allies are gaining in notoriety as bloodthirsty head-choppers and potential bombers.

Some of the countries opposed to the Syrian government are convinced that the priority, at least for now, must be defeating terrorism in Syria, Iraq, Libya and elsewhere.

Syria has been gripped by foreign-backed militancy since March 2011. Damascus says Saudi Arabia, Turkey and Qatar are the main supporters of the militants fighting the government forces.

According to UN special envoy for Syria Staffan de Mistura, some 400,000 people have lost their lives as a result of over five years of conflict in Syria.