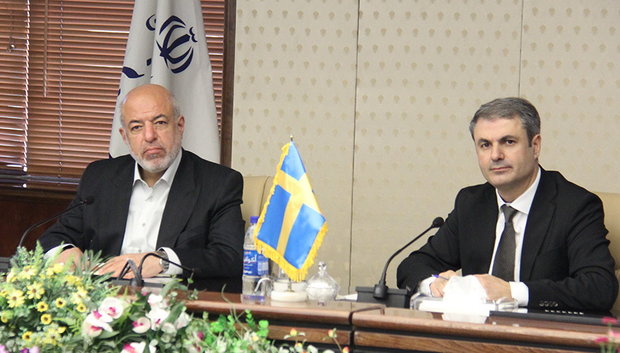 Hamid Chitchian and Swedish Energy Minister Ibrahim Baylan met on Saturday in Tehran where they discussed the prospects of bilateral cooperation in energy sector. Mr. Chitchian hailed years of good relations between Iran and Sweden and said that however sanctions had stymied the process; “with the removal of sanctions, Swedish famous companies ABB and Ericsson, two prestigious firms in energy and electricity, would participate in Iran’s energy projects as transferring technology,” he told the Swedish minister. “Iran produces an annual sum of 74,000mW, with projected growth of 6-7 per cent during next 10 years which will add another staggering 50,000mW to the current capacity.”

Chitchian told Swedish minister that private sector had contributed to almost half of Iran’s power plant capacities; “we welcome Swedish cooperation in deals which guarantees technology transfer; we predict 5 million smart devices to be used by users and Swedish Ericsson would contribute to Iran’s data transfer sector,” said the minister. “We also welcome single-mode production of energy or Cogeneration or combined heat and power (CHP).”

Swedish minister Baylan said that he had a positive assessment of Sweden’s cooperation with Iran and the world in power generation; “removal of sanctions provides valuable opportunities for both sides to revive relations to new highs, and we welcome participation in Iran’s power sector,” he told the meeting.

“Sweden enjoys a capacity of 27,000mW and has valuable experience in smart networks, generation, energy storage, energy efficiency, and other technologies which would provide Iran with its needs in power generation,” Baylan concluded.