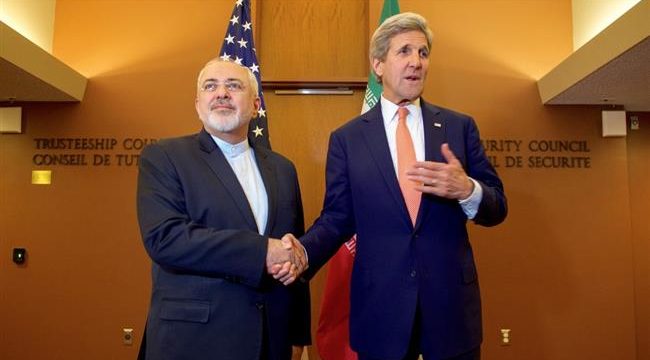 WASHINGTON (AP) — Secretary of State John Kerry and his Iranian counterpart will meet Friday for a second time this week over complaints from Iran that it’s not getting the sanctions relief it deserves under last year’s nuclear deal. The meeting drew concern from Republicans who said Kerry should not announce changes to U.S. sanctions that go beyond what Iran is entitled to.

U.S. officials said the Republican concern is misplaced and denied speculation, fueled in part by comments Kerry himself made earlier this week, that any changes are coming. But the officials said Kerry, who met with Zarif at the United Nations on Tuesday, would likely remind Iranian officials and foreign banks and businesses that certain once-prohibited transactions with Iran are now allowed under U.S. law.

“They will continue to talk about the sanctions relief process, and the degree to which banks, foreign and domestic, as well as institutions foreign and domestic, are evaluating their options under the (nuclear deal) and the degree to which they have before them a sufficient level of understanding to make decisions with respect to sanctions relief,” State Department spokesman John Kirby said.

Kirby declined to elaborate on what Kerry might say publicly after the meeting, but other officials said he might make comments designed to encourage foreign financial institutions to take advantage of new opportunities with Iran afforded by the sanctions relief. Those officials spoke on condition of anonymity because they were not authorized to discuss the matter publicly.

In addition to Kerry’s and Zarif’s discussions, the group in charge of implementing the broader nuclear deal will meet Friday in Vienna, where the agreement was reached last July. The State Department’s third-ranking diplomat, Undersecretary of State for Political Affairs Thomas Shannon, will lead the U.S. delegation to the meeting, which will also be attended by officials from the other parties to the accord: Britain, China, France, Germany, Russia, the European Union and Iran.

Iran, as well as European and Asian banks, wants financial restrictions that remain eased, or at the very least, clarified. Despite the relief it was given in the nuclear deal, Iran remains under numerous U.S. sanctions related to its ballistic missile activity, support for terrorism and human rights abuses.

The Obama administration insists it has met its obligations under the nuclear deal but acknowledges that some sanctions relief has been slow. The administration has ruled out giving Iran access to the U.S. financial system or direct access to dollars, but American officials have been considering other ways to Iran reap the full benefits of the deal in which it agreed to curb its nuclear program in exchange for billions in sanctions relief.

Zarif complained this week that the administration has not been “proactive” in explaining the sanctions relief to international banks and that as result, Iran remains locked out of the international financial system. That is disputed by Washington, which notes it has dispatched officials to explain to banks and other businesses what is legal.

“We would argue that we have been active in trying to explain the components of the (nuclear deal),” Kirby said. “What we absolutely are not trying to do is become an obstacle in any way of foreign banks and institutions working with Iran through the sanctions relief process and doing legitimate business with Iran.”

Still, U.S. officials say they are willing to consider additional steps. One official stressed, though, that there is only so much the United States can do. That official noted that Tehran’s continuing suspect behavior, particularly with missile tests, may be more responsible for international reluctance to do business with Iran than the remaining U.S. sanctions.

Congressional Republicans called on Kerry Thursday to specifically rule out the possibility that Iran will be given even indirect access to either the dollar or the U.S. financial system. They pointed to comments Kerry made after his Tuesday meeting with Zarif in which he said that they would use Friday’s meeting to “solidify” efforts to ensure Iran gets what it deserves under the deal.

“The administration should definitively rule out any potential workaround that provides Iran — directly or indirectly — with access to the dollar or the U.S. financial system,” House Speaker Paul Ryan of Wisconsin said in a statement. “We hope that’s the message Secretary Kerry delivers to Foreign Minister Zarif on Friday.”

Their comments come after House Foreign Affairs Committee Chairman Ed Royce of California introduced a bill that prohibits the administration from allowing the dollar to be used in trade transactions with Iran.