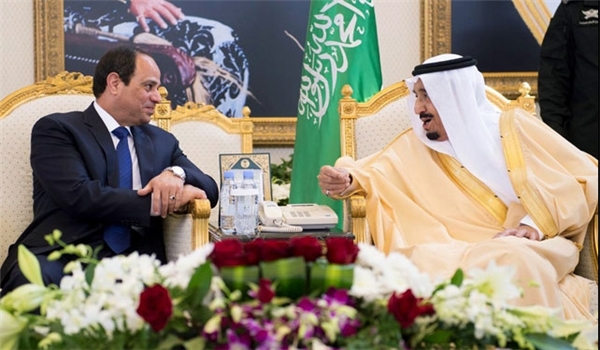 Alwaght- The Egyptian scene these days is seeing new developments the latest of which were the protests that sparked after the Egyptian President Abdel Fatah el-Sisi has handed over two Egyptian islands at the Red Sea to Saudi Arabia, causing a serious backlash. Egypt was recently also destination for diplomatic visits the most important of which is that made by the Saudi King Salman. These issues and more were covered in an interview with the Egyptian political analyst Alhamee al-Maligee.

Alwaght: How has the Egyptian parliament reacted to the Islands controversy? Do you think that it would vote for handover should it is presented with the plan?

Al-Maligee: The islands handover would be exposed to parliament vote according to Egypt’s constitution. The president is obligated to present his plan to the parliament. El-Sisi himself said that it would be presented to the country’s parliament. Concerning the approval, it must be said that the assessments so far suggest that a considerable numbers of the lawmakers would vote in favor of handover. But as the president and the parliament members said yesterday and the day before yesterday, technical committees would be formed to see about the issue from different strategic, historical and geographical aspects. When the committees prepare their report, the plan would be sent to the parliament for discussion. Then there would be the yes or no voting. At the end of the road, the issue is very much dependent on the committee report and the results that it would come up with.

Alwaght: Do you think that if the former Egyptian President Jamal Abdel Nasser was present today, he would have agreed to give the Egyptian islands to Saudi Arabia, especially that we know that he so much defended their Egyptian identity?

Al-Maligee: To be honest, we cannot make judgments on the case. But concerning Jamal Abdel Nasser, we know that he was a political and nationalist leader and like any other Egyptian leader coming out of the army he would not have approved of ignoring even a particle of the country’s soil. However, as it is said the historical as well as social and economic conditions could put pressure. Anybody, an Egyptian, Arab or an Iranian person, who is following closely the issue knows this fact. For your information, many of those who held rallies against the plan were pro-Sisi or at least pro-June 30 uprising. But when it comes to rewarding the land the case is different. Nobody, including an Egyptian or Iranian person, under any conditions could make compromise on his land. The bloods are sacrificed in defense of the land. All of the divine teachings say that blood could be sacrificed in defense of the land, let alone this such strategic land as the Egyptian islands. According to the historians, Egypt has taken ownership of the islands since 1995. Actually, Egypt was allowed to control the islands at the time of rule of King Farouk of Egypt who of course defended their ownership. The islands showed their value during the 1948 Israeli-Arab war. At that time, Abdel Nasser was not a president but he certainly defended them. In 1956 we defended our islands when the US, France and the Israeli regime invaded Egypt. During the1956 war, the war reached these islands. In 1967 when Jamal Abdel Nasser closed down Suez Canal, as it is known as war started. So, the islands are of significance for Egypt from a strategic point of view. But concerning the land ownership or submission, we have to leave the case to the lawmakers, the historians and the cerographists to have their say on it.

Alwaght: There were wars in that region and they ended in Camp David accords the terms of which also covered the Egyptian islands. Do you think that by taking them, Riyadh would recognize terms of Camp David accords? Could Saudi Arabia find the islands as a justification for open relations with the Israeli regime?

Al-Maligee: I agree that Saudi Arabia has found a justification for starting direct ties with the Israeli regime, because it is now internationally obligated to show commitment to Camp David accords’ terms. There have been a lot of news even about the fact that in border redrawing there were direct connections between Tel Aviv and Riyadh. Thereby, the islands case is a good justification to bring to surface their behind-the-scenes contacts. I agree that this would result in pen relations as it is obvious there is coordination on different levels, though uncovered.

Alwaght: We know that Egypt is suffering from financial and economic problems. Would the Saudis exploit the Egyptian weak as well as its role and prestige in the region and Arab world to realize their policies?

Al-Maligee: Yes, certainly. If Egypt was not living such extremely difficult economic conditions, the case would have been different. There is a value loss of the Egyptian currency as there is Arabic, Western and regional pressure on Egypt too. The situation could be way different if all these conditions did not exist. If it was Hosni Mubarak’s time, when there was economic stability, they would never dare making such an offer to Egypt. But, there are published documents of contacts started from 1982 between the contemporary Saudi foreign minister and Ahmad Asmat abdel-Meguid, the Egyptian UN envoy at that time. Despite as their struggles, the Saudis have failed to force Mubarak to accede to their demands of gaining the islands. Even if we consider these islands as trusts, they were received by former presidents and they did not give it back. Burt President Sisi did not give them back TO Saudi Arabia as trusts. (Sarcastically) They could go to

King Farouk and take them back from him as they say they had lent them to him.

Alwaght: Having in mind that Egypt is known for its leading role, do you think that Cairo has lost its key regional role in favor of Saudi Arabia.

Al Maligee: Yes, in a large scale certainly. Its leading role comes as a result of different factors. One of them is economic and political stability. Economic crisis negatively affected Egypt’s role. Still, in a way or another, Egypt is trying to save its key role even now in the difficult conditions. Take as an example its position on the Syrian crisis which experienced not shift since the beginning. This makes a difference in ideas between Saudi Arabia and Egypt. The same thing could be said when it comes to the Yemeni crisis, or the Russian-Egyptian relations which are very firm and different from Russian-Saudi relations. So there is difference and this is characteristic of a deeply rooted and big nation. No matter how weak it becomes, the essential and fixed features remain standing. This is what makes it independent of political decision making. I think that if Egypt was in better economic conditions, the islands case would not be subject to discussion and at the same time the position on Syria could be more practical and effective. Egypt still keeps its independent stances despite the strains put on it by Saudi Arabia to change position on Syria. But Egypt’s standing is fixed since the beginning, especially about Syria’s unity, establishment of its government institutions and political and peaceful settlement of the crisis.