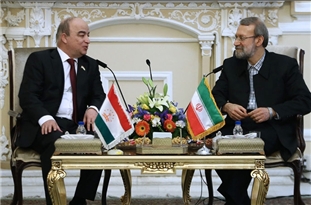 TEHRAN (Tasnim) – Iran’s Parliament Speaker Ali Larijani said that the Islamic Republic is resolved to expand its ties with Tajikistan in all fields.

In a meeting with Tajik Speaker of the Lower Chamber of Parliament Shukurjon Zuhurov on Tuesday, Larijani said Iran is resolute to increase its cooperation with Tajikistan.

“We are currently witnessing the upgrade of cooperation between the two countries in different fields and there is no obstacle in this regard,” the Iranian parliament speaker added.

Larijani made the remarks on the sidelines of the first meeting of Eurasian parliamentary speakers underway in Moscow.

Zuhurov, for his part, said Tehran-Dushanbe historical and cultural relations pave the way for the further promotion of cooperation between the two countries.

He added that the two countries have implemented several projects, particularly in economic and industrial sectors, and emphasized that no one can hinder bilateral cooperation.

The first conference of the Eurasian states’ parliament speakers, titled Inter-Parliamentary Cooperation in the Interests of Joint Prosperity of the Counties in the Eurasian Region in the 21st Century, opened in Moscow on Tuesday. Speakers from 19 countries are attending the meeting.