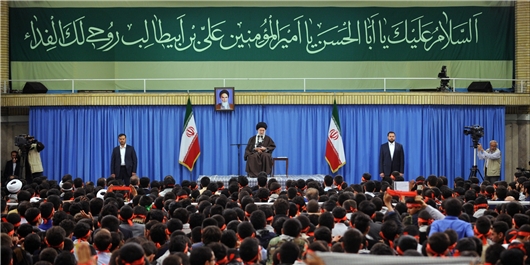 “Sometimes, they threaten us with war and bombing, but these statements are nonsense overstatement since they aren’t prepared and don’t dare to do so and if, possibly, they embark on such an act, they will receive a slap in the face and a crushing response,” Ayatollah Khamenei said, addressing members of Iranian Students’ Islamic Association in Tehran on Wednesday.

He, meantime, warned of enemies’ soft war against Iran, and said, “Now a comprehensive and creeping soft war is underway on the youth between the Islamic Republic of Iran on one hand and the US, the Zionists and their followers on the other hand.”

Ayatollah Khamenei described Iran’s progress, independence and its powerful presence in West Asia and the world, the Palestinian issue, the issue of resistance and the Iranian-Islamic lifestyle as the main issues on which Iran and the arrogant powers, headed by the US and Zionism, are in conflict.

He also underlined the necessity for continued progress in different scientific and technological fields, and said, “If we make concessions to the arrogant powers, they will certainly raise their opposition to biotechnology, nanotechnology and other sensitive scientific fields because they are opposed to any scientific, economic and civilization progress of the Islamic Republic of Iran.”

Ayatollah Khamenei has for a long time underscored the enemies’ incapability and lack of courage to attack Iran.

In relevant remarks in 2014, he  stressed the Iranian nation and Armed Forces’ preparedness to defend the country, and said the enemies will never dare to take military action against Iran.

In a meeting with senior Iranian officials, Ayatollah Khamenei said that Israel’s military threats against Iran are constantly repeated but the United States prevents Tel Aviv from launching a strike.

“The reason for the US’ prevention (of an Israeli attack against Iran) is that (it) does not see the attack affordable and we also strongly emphasize that a military attack on the Islamic Republic is not affordable for any one,” the Leader said.

Ayatollah Khamenei said that arrogant powers have no more options against Iran except for military threats and sanctions.

“Enemy’s hand is empty in both fields of sanctions and threats,” the Leader said.

Iran’s Leader stressed that the enemies have so far failed to confront the Islamic Republic of Iran.