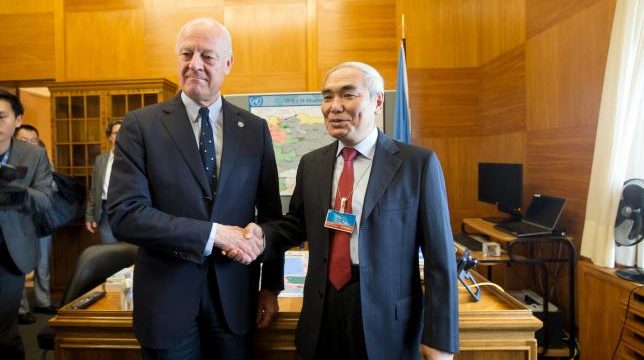 China’s new special envoy for the Syria crisis will visit Syria, Saudi Arabia, Iran and Russia to push for a peaceful solution of conflict there, the Chinese Foreign Ministry said on Tuesday, the latest diplomatic effort by Beijing in the region.

While relying on the region for oil supplies, China tends to leave Middle Eastern diplomacy to the other permanent members of the U.N. Security Council, namely the United States, Britain, France and Russia.

But China has been trying to get more involved, including recently hosting both Syria’s foreign minister and opposition figures, though at different times.

China appointed Xie Xiaoyan, a former ambassador to Iran, as its special envoy for Syria last month, and he is in Geneva participating in peace talks, Foreign Ministry spokeswoman Hua Chunying told a daily news briefing.

When he has finished there, he will go to Syria, Saudi Arabia, Iran and Russia, she added.

Xie is going to “have a deep exchange of views with relevant parties on pushing for a political solution to the Syria crisis”, Hua added.

She provided no other details.

Xie this month praised Russia’s military role in the war, and said the international community should work harder together to defeat terrorism in the region.