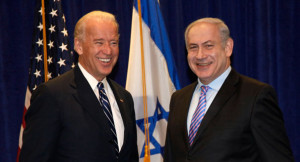 Biden sent to growl at Israel but only whimpers: Analyst

Referring to US Vice President Joe Biden’s recent comments to the pro-Israel advocacy group J Street, a political analyst has said that in the aftermath of Bernie Sanders’ criticism of Israel,  Biden was set loose to show that the Democrat Party establishment can also growl at Tel Aviv, but ended up sounding more like a whimpering puppy.

Biden on Monday criticized Netanyahu over his regime’s illegal settlement activities in the Palestinian occupied territories, saying he the premier is moving Israel in “wrong direction.”

Biden called the tens of thousands of Israeli settlements an obstacle to a two-state solution, and denounced moves under Netanyahu as “counterproductive” to Israel’s security.

“This is yet another contrived story engineered to bolster Hillary Clinton’s campaign for the presidency,” Barry Grossman, who is based on the Indonesian island of Bali, told Press TV on Tuesday.

“Vice President Biden’s comments to the pro-Israel advocacy group J Street are an almost verbatim replay of the talking points he was told to ventilate at AIPAC last month. He said absolutely nothing on Monday that he did already say before,” the international lawyer said.

“Faced with some genuine criticism of Israel by Bernie Sanders in the fiercely contested Democrat Party presidential nomination race, mainstream media  is now bending over backwards to create the impression that the Democrat Party establishment can also growl and bark at Israel, but in reality Biden comes off sounding far more like a whimpering puppy,” the analyst noted.

Independent Senator and Democratic presidential Sanders on Sunday criticized the US foreign policy on Israel and Palestinians, noting that America “cannot ignore the suffering of the Palestinian people” in its support of Israel.

Biden not critical of Israel

Grossman said the fact is that “there is nothing in Biden’s comments or indeed, in his underlying inclinations, which can be interpreted as critical of Israel or the status quo, although he did once again say a great deal that is on its face clearly hostile to Palestinians.”

“His claim that the US is somehow dismayed about Israel’s apparent abandonment of any prospect for a two state solution is absurd given that Netanyahu’s position is the inevitable and therefore must be seen as the intended consequence of US policy, which proclaims that any solution must come from negotiations rather than resort to legal solutions or Palestinian resistance of any kind,” he stated.

“Indeed, if the Obama administration was even remotely concerned about continued settlement expansion in Palestine, it would long ago have proposed ‘long arm jurisdiction’ legislation to criminalize any Americans involved in supporting settlements, funding settlements, or otherwise carrying out settlement related unlawful activities,” he noted.

“The Obama administration’s failure to act stands as a green light to such activities and all related Zionist violence,” the analyst argued.

“Meanwhile, Obama’s heir apparent – Hillary Clinton – seems to have herself back-pedaled from the notion of a two state solution in that during her latest debate with Bernie Sanders, she referred only to Palestinian self-rule, a notion which is very different from a two state solution.  Perhaps Vice President Biden is not in the loop on such matters or has simply agreed to carry out his usual performing monkey routine US vice presidents specialize in, as the pro-Clinton and pro-Israel establishment tries to create the impression that it too can criticize Netanyahu’s intransigence,” he observed.

“Despite the over stated headlines associated with Biden’s comments to J Street, he minced no words in criticizing Palestinians for having the temerity to join the International Criminal Court. He also made a point of reiterating the required oath of loyalty to Israel by again stating that the US is obligated to guarantee Israel’s security, before also harshly criticizing Palestinian leaders for not denouncing armed resistance – which not surprisingly Biden characterizes as terrorism, or terrorist acts,” Grossman said.

“He also made a point of reiterating the required oath of loyalty by again stating that is a US obligation to guarantee Israel’s security, before also harshly criticizing Palestinian leaders for not denouncing armed resistance – which not surprisingly Biden characterizes as terrorist attacks,” he added.

“Then again, considering that he nominally represent a nation which has all but gone into apoplectic shock at the mere suggestion made last week by Bernie Sanders that Palestinians are human too,  we should never expect much from the world’s foremost state sponsor of terrorism,” he emphasized.

Palestinians must stand firm in face of occupation

“All of this should leave Palestinians with no doubt that the only way left  to assert their inalienable rights is to stand firm in the face of occupation is to exercise their lawful right to resist,” the analyst said.

“Palestinians gave peace a chance when during the 10 years following the Second Intifada, the incidences of lethal attacks on their occupiers were reduced by more than 90 percent from that which prevailed during the Intifada itself. The occupiers’ response was to expand illegal settlements at an ever expanding rate, while launching a series of US backed, brutal military assaults on the civilians of Gaza,” he pointed out.

“The message being sent by the US and Israel alike is that the only way left to oppose the Zionist brutality and illegal occupation is to embrace armed resistance and use sabotage, much the way the French have been lionized for doing during their occupation by Nazis during WW2,” Grossman concluded.