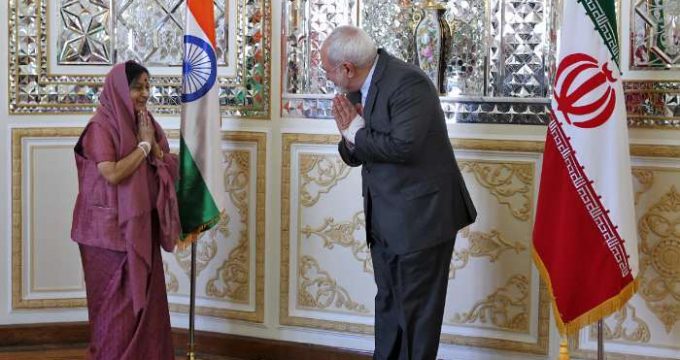 Indian top diplomat Sushma Swaraj has welcomed Tehran’s decision to reserve the Farzad B gas field in Iran for joint development, the Indian Ministry of External Affairs said on Sunday.

Swaraj arrived in Tehran on Saturday, kicking off her four-day diplomatic tour of Iran and Russia. She met with Iran’s Foreign Minister Mohammad Javad Zarif on Sunday, discussing a wide range of bilateral and international issues.

“Both sides discussed the energy partnership between India and Iran… On Farzad – B, both sides took note of the constructive discussions held during the recent visit to Iran of MoS PNG [Ministry of Petroleum and Natural Gas]. The Indian side welcomed the Iranian decision to keep the Farzad – B field outside the auction basket,” Indian Foreign Ministry spokesman Vikas Swarup said in a statement.

Earlier this month, Iran and India agreed to sign a contract to develop the Farzad B gas field natural gas field in the Persian Gulf by October.

Companies involved in the deal were given deadlines to complete negotiations, the spokesman noted, adding that India had previously been provided with a pricing formula for Farzad B gas.

Farzad B, with estimated reserves of 12.8 trillion cubic feet of gas, was opened in 2008 by a consortium of three Indian companies: ONGC Videsh, Oil India and Indian Oil.

The field has been left undeveloped due to international anti-Iran sanctions that have gradually begun to be lifted this year.
By Sputnik