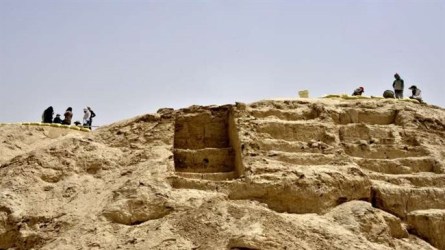 Tehran, April 16, IRNA – Archeologists have identified a pottery kiln, miniature statues of humans and animals, and straw pieces during the fourth season of excavation at Talebkhan Mound (Yalda Mound), Sistan-Baluchestan Province, said the caretaker of the archeology group.

The excavations took place in 35 days with the participation of post-graduate students in archeology field from Zabol University, said Hosseinali Kavosh, according to Iran Daily.

Identification of the pottery kiln indicates that the inhabitants of the area used to meet their own needs and conduct trade in their products with other regions.

He said two of the statues have necklace. Also there are statues of Sistani hump cows in various sizes, he added.

He suggested that a museum is launched in cooperation with Zabol University and Iran Cultural Heritage, Handicrafts and Tourism Organization in the university to maintain the relics for a certain period.

It is a good idea to launch a museum in every university which offers course in archeology, Kavosh said.

Kavosh identified the site in 2010.