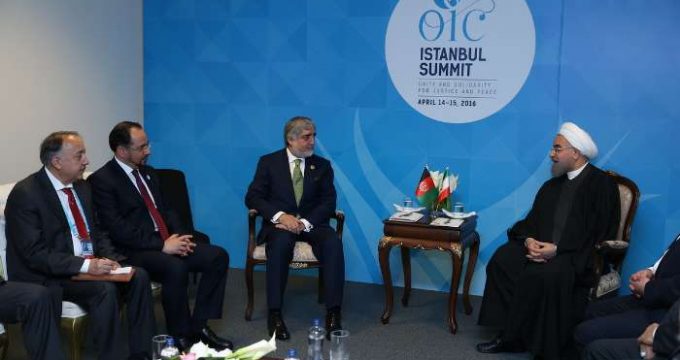 President: Iran always on the side of Afghan nation, government

Istanbul, April 14, IRNA – President Hassan Rouhani said on Thursday that Iran will always side with Afghan nation and government.

Rouhani made the remarks in a meeting with Chief Executive of the Islamic Republic of Afghanistan Abdullah Abdullah on the sidelines of the 13th Summit of the Organization of Islamic Cooperation (OIC) in the Turkish city of Istanbul.

President Rouhani said Iran would continue its support for the Afghan nation and government.

He called for further boosting bilateral ties between Tehran and Kabul, adding that Iran will always side with Afghan nation and government.

The President called for expansion of cooperation between Iran and Afghan investors and Entrepreneurs.

Abdullah Abdullah for his part appreciated Iran’s support for Afghanistan during the difficult days, adding that Kabul is committed to expanding all-out ties with Iran.

He expressed hope that by activating Iran-Afghanistan Joint Commission, the process of cooperation between Tehran and Kabul will be accelerated.