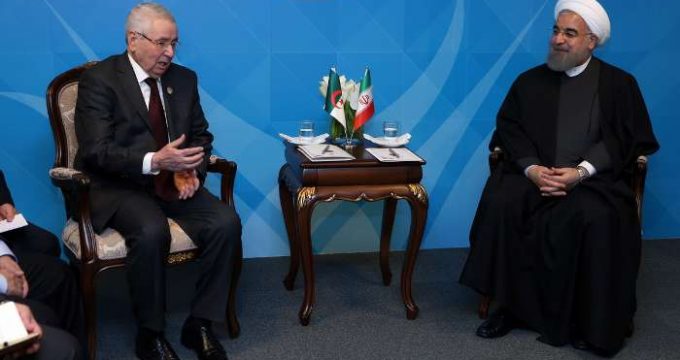 President: Foreign interference cause of trouble in region

Tehran, April 15, IRNA – President Hassan Rouhani said on Thursday that foreign interference is the cause of trouble in the region and called for collective cooperation in the fight against terrorism and extremism.

He made the remarks in a meeting with President of the Algerian Senate Abdelkader Bensalah on the sidelines of the 13th Summit of the Organization of Islamic Cooperation (OIC) in the Turkish city of Istanbul.

Saying that the ground is ready for expansion of Tehran-Algiers ties in the post sanctions era, he called for strengthening of all-out ties between Iran and Algeria.

Iran and Algeria share similar views towards regional and international developments and the two states relations are improving, Rouhani added.

Referring to the instability in North Africa, he called foreign interference and terrorist operations the cause of problems.

The President called for collective cooperation against extremism, terrorism and violence, and warned about spread of these dangerous phenomena.

President of the Algerian Senate for his part referred to Iranian and Algerian commonalities and called for boosting of all-out ties with Iran.

He said foreign interference is the reason behind regional problems, adding that nations should have the right to decide about their own destiny without foreign meddling.