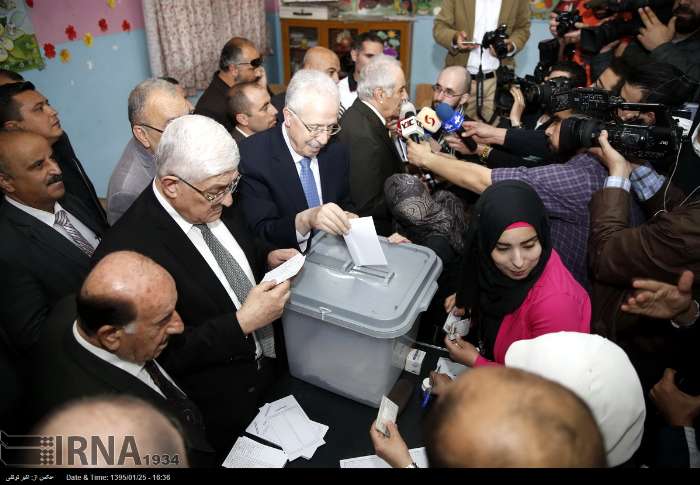 TEHRAN (Tasnim) – Syrian Awqaf(Religious Endowments) Minister Mohammad Abdul-Sattar al-Sayyed praised the high turnout in the ongoing parliamentary elections in the Arab country, saying that holding the polls is a response to the cruelties of foreign-backed terrorists in Syria.

Speaking to the Tasnim News Agency on Wednesday after casting his ballot, Sayyed said, “The scene that we are witnessing today is a reaction to cruelty, terrorism and destruction.”

“We are seeking to rebuild Syria and preserve its legal institutions and this election is a message to all those who make ill-considered remarks and false statements about the Syrian nation everywhere,” he said.

The Syrian minister added that those who question democracy in Syria should now look at the nation and get their answers from the presence of thousands of people in the polls.

According to Tasnim dispatches, the polls opened at 7:00 am (local time) and are scheduled to close at 7:00 pm, but voting could be extended if required.

Nearly 7,200 polling stations have been provided across the crisis-hit country and as many as 3,500 candidates, including women, are competing for a place in the 250-seat parliament.

Syrian candidates stopped their political campaigning on Tuesday one day before the elections.

The last parliamentary elections were held in 2012, just months after the adoption of a new constitution in the country.

The voting will be held amid an ongoing war against terrorism throughout the Arab country, which has been gripped with a catastrophic civil war since 2011.

According to a February report by the Syrian Center for Policy Research, the conflict in Syria has claimed the lives of over 470,000 people in total.