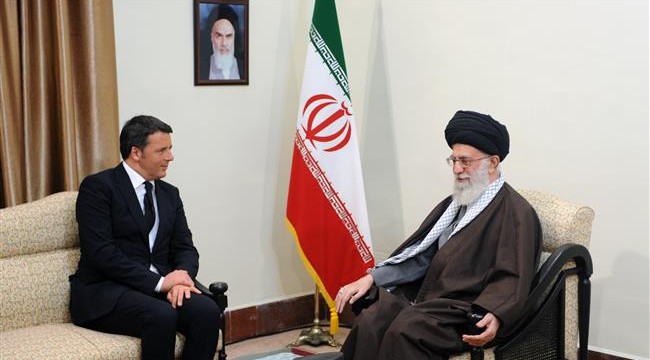 Renzi: Iran sanctions should be lifted based on nuclear deal

Tehran, April 13, IRNA – Visiting Italian Prime Minister Matteo Renzi said on Tuesday that the sanctions against Iran must be lifted based on the nuclear deal reached between Iran and G5+1.

He made the remarks in a meeting with Iranian Supreme Leader Ayatollah Seyyed Ali Khamenei.

Italy prime minister referred to his talks with Iranian officials and called for reforming the financial and economic mechanisms in a way that would help boost bilateral relations.

He said that Italy is committed to realize its promises toward Iran based on the nuclear deal.

I believe that according to the nuclear deal, Iran’s sanctions should be lifted, Renzi added.

He said that he shares similar views with Iranian officials on cutting terrorists’ financial sources, adding that elimination of Daesh (ISIS) is a priority for Italy.

The prime minister expressed regret over sabotage of the merciful face of Islam under the pretext of fighting terrorism and said Islam should not be condemned for what terrorists do in the European countries.

He called for fighting terrorism in cultural ways, adding that it should be showed to the world that religions are seeking peace, dialogue and co-existence among all sects.

Renzi also hailed the Supreme Leader’s role in encouraging co-existence among followers of all religions as very crucial and important.