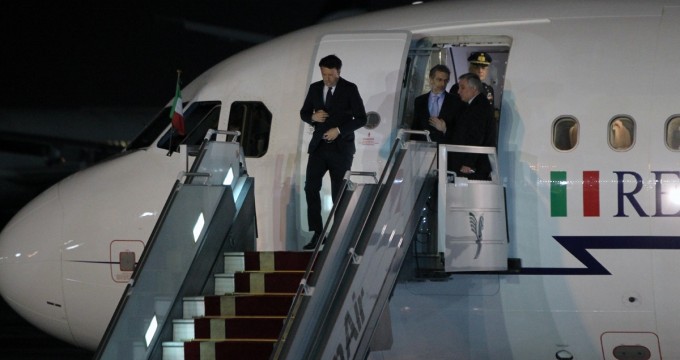 Upon arrival, he was warmly welcomed by Iranian Minister of Mine, Industries and Trade Mohammad-Reza Nematzadeh.

While in Iran, Renzi is scheduled to hold talks with President Hassan Rouhani and several high-ranking Iranians officials.

The ways for fostering economic and trade cooperation during post-sanctions era and active presence of Italian investors and companies in Iran are among the issues to be discussed during the meetings.

Some Italian companies have been active in Iran’s oil projects, including South Pars and Darkhovin oil fields, since last year.

In January, Iran and Italy signed 17 agreements worth 17 billion euro.

Renzi, in a joint press conference with President Rouhani at that time, said that there were many sectors including energy and health that the two countries may cooperate and added that there are plenty of opportunities in Iran for Italian small and medium sized companies.

In the press conference, Renzi underlined Iran’s prominent position and role in regional equation and added that Iran had an effective and active role in the fight against terrorism, although this major threat needs unity and public coordination among all world countries.

Since the nuclear deal between Iran and Group 5+1, Italy has been trying to turn into Iran’s first trade partner in Europe and in this connection several Italian ministers as well as trade and government delegations have visited Iran.