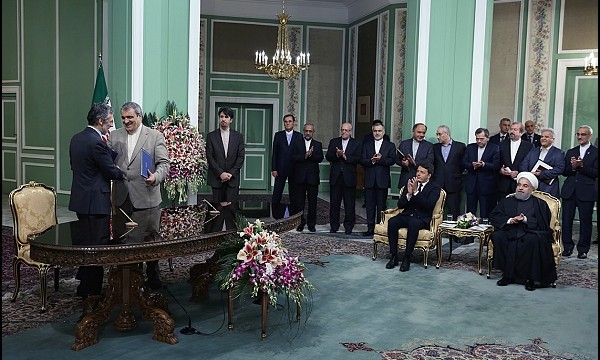 During the Italian Prime Minister Matteo Renzi trip to Tehran, seven cooperation documents have been signed between the two countries.

Deputy-foreign minister for Arab and African affairs has received Special Representative of the UN Secretary-General on Syria.Hossein Amir-Abdollahian met visiting Staffan de Mistura on Tuesday and discussed the latest developments of Syria.

Iran-Italy Joint Chamber of Commerce’s Chairman expressed hope that Iran’s initial contract with Fiat will get finalized with the normalization of the monetary and banking relations.

Deputy Foreign Minister for Arab and African Affairs Hossein Amir Abdollahian said the people of Syria should be allowed to decide their own fate.

The European Union (EU) has extended its sanctions against 82 Iranian individuals, whom it accuses of human rights violations.

The Telegram social network has made satisfactory cooperation with Iran in filtering unethical channels, says Iran’s minister of Communications and Information Technology.

Iranian President Hassan Rouhani called for accelerated efforts to fully get rid of the fears for trade with Tehran that persist from the time of anti-Iran sanctions.