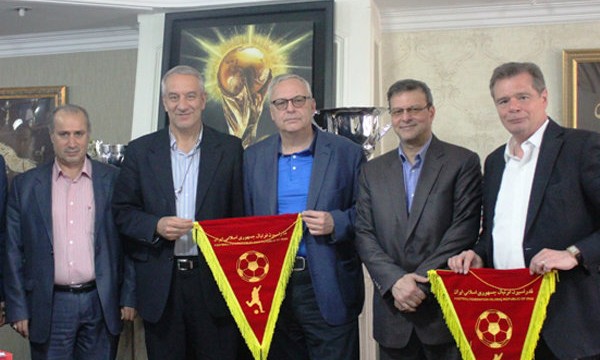 Football Federation of the Islamic Republic of Iran (FFIRI) President Ali Kafashian welcomed the visiting President of Hertha BSC Werner Gegenbauer voicing eagerness to launch bilateral cooperation with the German Football Federation in line with growth and success; “the Iranian people are deeply interested in football of Germany as one of the top countries in the sports field.”

“Ali Daei and Karim Bagheri mark two national team footballers who played in Hertha BSC turning into successful football players in the world with their efforts,” he continued.

Kafashian went on to urge further communication between the two countries’ football clubs; “during my visit to Germany five months ago and at a meeting with head of the German Federation, it was decided to strengthen the link between national and club teams of the two sides as the German side emphasized on continuous collaboration in the field.”

Iran Football Federation president offered a report on the status of men and women’s football and futsal in FIFA Ranking saying “Iran remains as the top Asian team and the 42nd team on the basis of FIFA Rankings.”

“In futsal, Iran ranks first in Asia and fifth in the world and Iranian women athletes managed to claim the title of AFC Futsal Championship for the first time,” highlighted Kafashian adding “Iran ranks first in Asia and sixth in the world in beach soccer; overall, Iran enjoys best positions in Asia while as the Iranian nation expect national footballers to remain on top platforms.”

Kafashian emphasized the need to launch good relations with powerful countries like Germany in order to reach better positions; “we would also seek to take advantage of Germany’s instructors to bring about further improvement in the country’s football since bilateral cooperation would lead to growth and increased knowledge.”

Hertha BSC President Werner Gegenbauer, for his part, expressed satisfaction towards his presence in Iran underlining “the trip aims to discuss and examine venues for boosting bilateral cooperation as well as to put the outcomes into operation.”