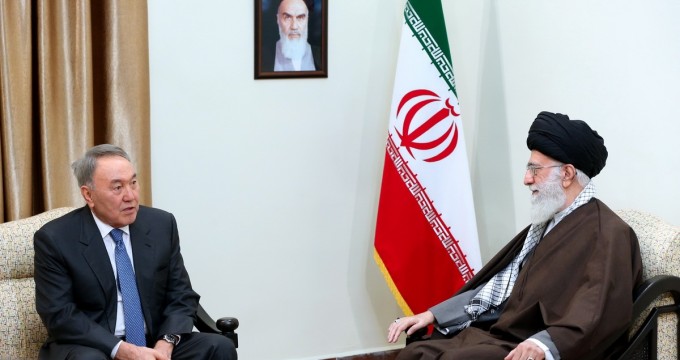 US not sincere in fight against terrorism: Leader

Leader of the Islamic Revolution Ayatollah Seyyed Ali Khamenei says certain powers, the US in particular, are neither serious nor sincere in the campaign against terrorism.

Ayatollah Khamenei made the remarks in a Monday meeting with Kazakh President Nursultan Nazarbayev in Tehran, where Iranian President Hassan Rouhani was also present.

Following an earlier meeting with the Kazakh president, Rouhani said the Islamic Republic and Kazakhstan hold common positions on regional developments, adding that extremism, sectarian division and terrorism are the major threats to the Muslim world.

Heading a high-ranking politico-economic delegation, Nazarbayev arrived in Tehran to discuss ways to improve mutual relations and the latest regional and international developments.

The Kazakh president’s two-day visit to Tehran comes at the invitation of his Iranian counterpart and in response to an earlier trip by Rouhani to Astana on September 8-9, 2014. The two presidents inked a number of agreements to boost cooperation in various fields, particularly in the economic sphere.